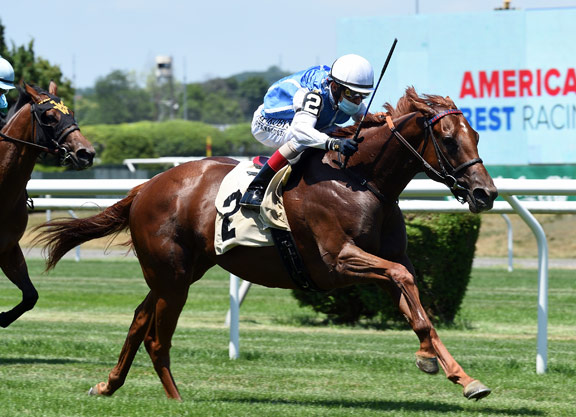 ALDA (Munnings) became the newest 'TDN Rising Star' Thursday with a decisive score at Belmont Park. Rallying to be third on debut in a five-panel event at this oval June 12, she was hammered down to even-money to improve over an extra furlong here. Saving ground in a joint third, the homebred was several lengths off the dueling leaders through a sharp first quarter in :21.89. Closing the gap entering the backstretch, the homebred split horses with a three-wide move turning for home and overtook Illegal Smile (Ire) (Camacho {GB}) in the lane, rolling clear to win by 2 1/2 lengths.

“Johnny [Velazquez] said she was much more professional today,” trainer Graham Motion said in a post-race interview with NYRA's Maggie Wolfendale. “Last time, she just broke a tad slow which cost her and he kind of had to rush her a little bit. Today, she broke much better. Actually, Johnny said she was pretty sharp the first part, but he could do whatever he wanted, which really helped. She was pretty professional, I thought.”

He continued, “My theory with the 2-year-olds is if they take you to the races, just go with it, and she's done everything right. She's such a pro in the mornings, she makes me look good, I think.”

The winner is a half-sister to Group 2 winner Alignement (GB) (Pivotal {GB}). Her dam Soldata, a half-sister to MGSW sire Exhi (Maria's Mon), produced an Into Mischief colt named Serifos in 2019 and a Tapit colt in 2020.