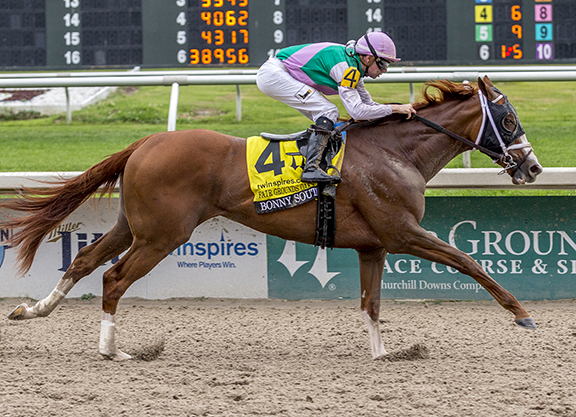 Finite (Munnings) was out to cement her spot at the head of the sophomore filly class in Saturday’s GII TwinSpires.com Fair Grounds Oaks, but it was her sire’s Bonny South who came with a stinging rally from last in the field of six to cause a minor upset and soothe–at least in a minor way–the sad loss last month of stablemate and fellow Juddmonte homebred and ‘TDN Rising Star’ Taraz (Into Mischief).

Taken hold of immediately by Florent Geroux, Bonny South dropped out to trail, as French Rose (Raison d’Etat) showed the way out of the stretch from Stop Shoppin Tammy (Tapit) and Antoinette (Hard Spun). Finite, customarily closer the pace, tugged for her head beneath Ricardo Santana, Jr. passing the seven-eighths pole and tracked three deep, but keen, as they raced to the midpoint of the backstretch. Finite settled better leading the four-furlong point and seemed to have them right where she wanted them rounding the turn, but Geroux was keeping his powder dry on the Juddmonte homebred, waiting for the right time to pull the trigger. Finite was third in a line of four in upper stretch, with Tempers Rising (Bayern) revving up to her outside, but while the chalk was drifting in badly at the eighth pole, Bonny South was just hitting top gear with ground-gobbling strides and drew off to score impressively. Finite weakened to fourth at 2-5.

A disappointing fourth on Churchill sprint debut Nov. 14, Bonny South was soundly defeated into second in her two-turn unveiling at this track Dec. 22, but was subsequently awarded the victory upon the demotion of O Seraphina (Munnings) for a drug positive. Trying winners for the first time at Oaklawn Feb. 15, she was the best part of 15 lengths behind a loose leader at one stage, but outfinished Shedaresthedevil (Daredevil) to score by 3/4 of a length. The strength of that performance was validated when the runner-up returned to annex the GIII Honeybee S. next time out.

“I ride her with a lot of confidence,” Geroux said. “Last time out she beat a very nice filly. Today, of course, I thought about Finite, and how she has been running well. I was just hoping she would take a step down, and we would take a step up.”

The 39th stakes winner and 17th graded winner for her white-hot sire, Bonny South is bred on the exact same cross responsible for Finite and she is the 36th black-type winner and 15th graded winner out of a Tapit mare. Her unplaced dam is a half-sister to Juddmonte’s talented Etoile Montante (Miswaki), winner in France of the G1 Prix de la Foret on Arc weekend and MGSW/GISP in this country. The latter is the dam of MGSW turf marathon distaffer Starformer (Dynaformer).

Second dam Willstar is a full-sister to Viviana, dam of the dynamic distaff duo of MGISW Tates Creek (Rahy), who did her best work on the grass; and Sightseek (Distant View), a seven-time Grade I winner on the dirt. Third dam Nijinsky Star was a half-sister to Six Crowns (Secretariat x Chris Evert), dam of champion Chief’s Crown (Danzig). This is also the female family of Bowman’s Band (Dixieland Band) and the recently retired Pollard’s Vision (Carson City).

Touch the Star is the dam of Bonny South’s 2-year-old full-sister Sun Path, a yearling full-brother and was most recently bred to another Gone West-line stallion in Quality Road.