Home » Archive » Europe » Munnings: A Life of his Own

Munnings: A Life of his Own 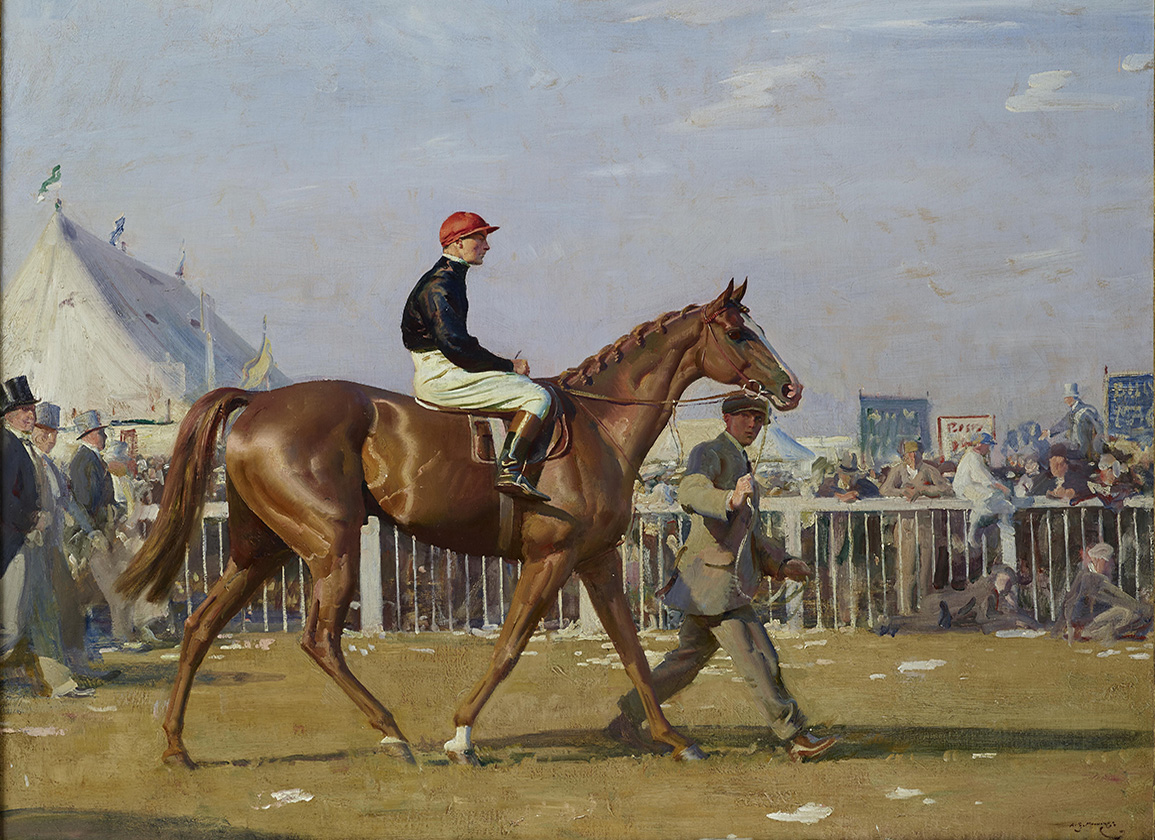 There is one blatant flaw to the exhibition of works by Sir Alfred Munnings (1878-1959) that has just opened at the National Horseracing Museum in Newmarket—and that is its lamentable brevity, ending as soon as June 12. Barely less obvious, however, is the aptness of its place in the calendar, incorporating as it does a long holiday weekend in celebration not just of a royal jubilee, but of national culture and (across the Derby and a Lord's Test) sporting tradition.

In the words of John Masefield, engraved on the epitaph for Munnings in St. Paul's Cathedral: “Oh friend, how very lovely are the things/The English things, you helped us to perceive.” It is a measure of the span of the monarch's reign that one of the final commissions executed by Munnings, actually not part of this quite marvellous exhibition, was of the young Queen with her finest racehorse, Aureole, before the 1954 Coronation Cup at Epsom—almost a year to the day after her own coronation. And to many admirers, Munnings will forever preserve the quintessence of an England never to be retrieved: pastoral, sporting and very beautiful.

Even in his own day, Munnings was a bulwark of tradition, with a notorious distaste for the artistic experimentation of contemporaries. His own modernity was confined to designation as a “British Impressionist”, and instead he extends a native tradition as our greatest equestrian painter since Stubbs.

So while this may be a busy time of year for Newmarket's professional community, its members must beg, borrow or steal whatever time they can to seize this quietly historic opportunity right on their doorstep. Some of the exhibits in 'A Life of His Own', after all, have never previously been disclosed to public view.

What a living piece of history, for instance, is the depiction of Humorist and Steve Donoghue being led onto the track for the 1921 Derby, loaned from a private collection. In his autobiography Munnings recalled making a study of the horse at Charles Morton's yard, on a sunny Sunday soon after his success, a scheduled run at Royal Ascot having been abandoned after he burst blood vessels in a gallop. Munnings and Morton then shared a couple of bottles of the celebratory champagne sent to Letcombe Bassett by Humorist's owner, Jack Joel, and after lunch the artist succumbed to the shade of a yew on the lawn. The next thing he knew, he was being woken by Morton's “pretty little wife—far younger than he—looking like Ophelia in Hamlet, wringing her hands” and crying out that Humorist was dead.

Then Morton himself appeared, his phlegm undiminished either by the champagne or the death of a Derby winner. He told Munnings to follow him into the yard for “a sight you won't see again as long as you live.” He threw open the door to Humorist's stall, and there he lay in the straw, one eye still open. There was blood everywhere. “Well,” said his trainer quietly. “There lies fifty thousand pounds' worth!”

Yet we today retain the priceless privilege of seeing the horse preserved in his vital glory by one of the great eyes ever to have united artist and horseman. Munnings invited Donoghue to his Chelsea studio to complete his prepared study of Humorist, seating him on a wooden prop in the famous black silks and scarlet cap; and he then made a social document of the background, with newspapers wind-strewn across the turf and a crowd hemmed between rails and tents and bookmakers' signs.

This exhibition, expertly curated by Katherine Field for the Palace House-based British Sporting Art Trust, encompasses some 40 works—not just oils, but also watercolours, drawings and sculpture—spanning 60 years of the artist's career, from recording the East Anglian country life of his youth to presidency of the Royal Academy. They incorporate samples of every stage in between: the Canadian Cavalry at war, the hunting field, landscapes, pageantry.

But Turf aficionados will especially prize the social documentation incidental to all this timeless art—as, for instance, the 1938 twin portrait of breed-shaping stallions Hyperion and Fairway for the 17th Earl of Derby, their grooms completing the serenity and veracity of the scene much after the fashion of Stubbs; or the casually attired, hatless riders following their dapper guv'nor onto the gallops against a summer sky of high cloud.

Munnings did much of this work in a studio converted from the last rubbing house on the Heath, a remote outpost near the end of the Devil's Dyke, working “in perfect silence but for the songs of skylarks.” Here he consented to a final racehorse portrait in 1951, having renounced such commissions after learning from Sun Chariot some years previously, “for the last time, the folly of attempting to paint racehorses.” What a benediction that he took so long to discover that folly, and not just for the town that welcomes him back to its midst for the next few days.

This story was posted in Europe, Shared News Europe and tagged A Life of his Own, exhibition, Munnings, National Horse Racing Museum, Newmarket, Sir Alfred Munnings.