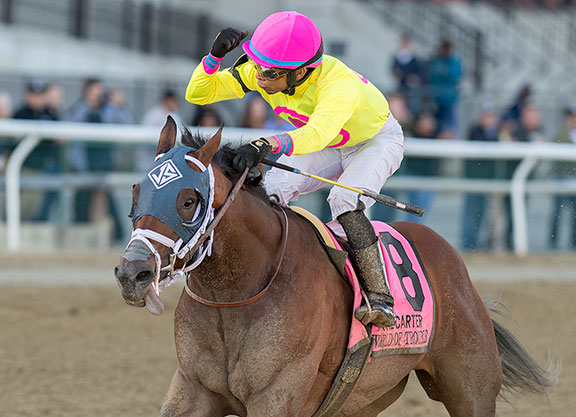 Michael Dubb, Madaket Stables and Bethlehem Stables' dual-surface Grade I winner World of Trouble (Kantharos–Meets Expectations, by Valid Expectations) has been retired from racing and will enter stud at Hill 'n' Dale Farms for the 2020 breeding season, Hill 'n' Dale announced Monday. A victor of the GI Carter H. on dirt and GI Jaipur Invitational S. on turf this year, the bay retires with a record of 13-9-2-1 and earnings of $1,263,300.

“He's the fastest horse I ever owned,” said Dubb. “My jaw dropped every time he raced. He was such an easy horse, as he could run on anything. He won Grade I races on both dirt and turf in New York this season, something that probably will not happen for me ever again. Since we couldn't make the Breeders' Cup due to a foot bruise, we decided it's best for him to start making babies.”

Breaking his maiden by 14 lengths in his debut, the Jason Servis trainee improved steadily as a 3-year-old in 2018, finishing his campaign with a neck second to eventual champion turf male Stormy Liberal (Stormy Atlantic) that earned him a 118 Beyer, the highest figure for a sophomore last year. He ran 100+ Beyers in his last seven starts and was victorious in seven of his last eight starts.

“With his mind, temperament, disposition and desire, I can't wait to breed to World of Trouble myself,” said Servis. “He could run on anything, winning stakes on fast and sloppy dirt and firm and yielding turf. It didn't matter; he would throw down those fast fractions that would lead him to victory regardless of the surface, track, or competition.”

The 4-year-old will now stand alongside his sire at Hill 'n' Dale, who acquired Kantharos in 2017 after a blazing start to his stallion career in Florida.

“As the most successful son of the rapidly rising Kantharos, we know breeders will love the horse,” said Hill 'n' Dale president John Sikura. “World of Trouble was a world-class racehorse with brilliant effortless speed.”