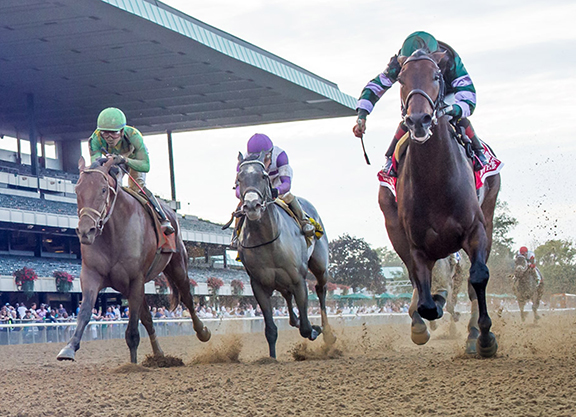 “This morning following his breeze yesterday we found a recurrence of an old suspensory injury,” Thomas said. “He was sound and comfortable, but something was a little abnormal. We had it scanned and it confirmed what we were thinking. He had done so much for the game and for Mr. Evans and for us–we were fortunate to have him–it just didn't make sense to put him through all the rigors of having to try to come back.”

Named the 2018 New York-bred Horse of the Year for his 5-year-old campaign, the six-time stakes winner had last been seen finishing fifth after dueling on a fast pace in defense of his Jockey Club Gold Cup title Sept. 29. Thomas said he was getting close to starting his 2019 campaign when the injury popped up.

“He was probably about three weeks out from a race,” the former assistant to Todd Pletcher said. “We had a race picked out at the end of Belmont for him that seemed tangible off of his work yesterday, but he's a horse that deserves to only be run in the best of light and after seeing what we saw yesterday, it's just a little unfair to try to push on with him.”

Diversify breezed five furlongs Saturday morning in 1:02.15 (9/12) in what would be his final workout. Thomas added that the injury did not immediately make itself apparent.

“He actually cooled out very well, well enough that I was pretty happy with how the work went,” he said. “I thought the breeze went really nicely, there was nothing abnormal about the work or subsequently following it, it was just kind of an abnormality I noticed in the stall, visually more than anything. It wasn't a lameness, I just look at a lot of legs every day and this was abnormal.”

Though Diversify, formerly trained by the late Rick Violette, never started for Thomas, he had been in the young conditioner's care for several months and made an impact during his stay.

“Even though we didn't get to run him, he was a thrill to have around the barn and the disappointing part isn't so much not getting to run him as much as we're not going to get to see him every day,” Thomas said. “To me, there are two responsibilities for me as his trainer and caretaker, one is to make sure that if we did run him, we'd run him only in the best of health and two, if I can't do that for him, I can at the very least make sure that he retires sound in a way that he can go on and enjoy the rest of his life, which is the case [by] stopping today.”