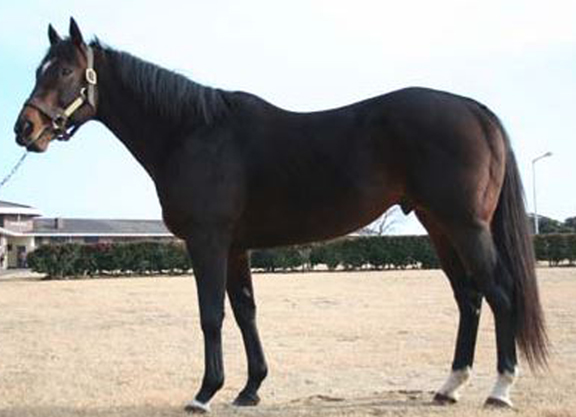 Menifee (Harlan–Anne Campbell, by Never Bend), a perennial leading sire in Korea since his first crop of runners hit the track in 2010 and whose impact on the Korean breeding industry has drawn comparisons to Sunday Silence in Japan, died June 13 from a reported heart attack at the KRA Stud Farm on Jeju Island. He was 23 years of age.

Bred by Arthur Hancock and raced in partnership with James Stone, Menifee was conditioned by Elliott Walden to win the 1999 GI Toyota Blue Grass S. and runner-up efforts to Charismatic (Summer Squall) in the 1999 GI Kentucky Derby and GI Preakness S. He added a popular victory in that year’s GI Haskell Invitational H. and was retired to stud following a second-place finish to stablemate and future Korean stallion Ecton Park (Forty Niner) in the GI Super Derby.

Sold to the Korean Racing Association in 2007, Menifee was the leading freshman sire and leading sire of 2-year-olds in Korea in 2010 and topped the leading general sires list each year from 2012 through 2017. He finished second to Ecton Park in 2018, but was leading the table at the time of his death.

From seven crops to race in Korea, Menifee, who overcame a potentially life-threatening bout with urinary tract stones in 2011, has sired 255 individual winners, chief among them Power Blade (Kor), who won the Korean Triple Crown in 2016 and has added two victories in races officially recognized as black-type subsequent to a decision to award Part II status to a half-dozen Korean feature races in July 2016. Menifee is represented by 45 current 2-year-olds, 40 yearlings and 59 foals of 2019.