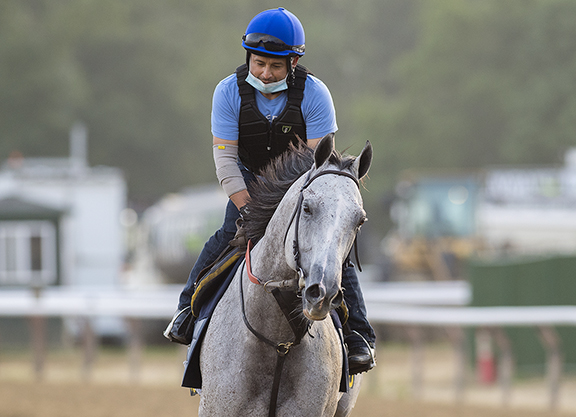 Patricia Generazio’s homebred 9-year-old gelding Pure Sensation (Zensational–Purse Disco, by Disco Rico) was retired following a seventh-place finish in Saturday’s GIII Troy S. at Saratoga. Out of the Disco Rico mare Pure Disco, the popular grey retires with a record of 38-14-5-7 and purse earnings of $2,004,050.

“He’s been amazingly consistent over the years. He was a very fast horse from the beginning and he will be a tough guy to replace,” said trainer Christophe Clement. “He was a very straightforward horse and very kind. He traveled all over the country. He ran last year in the Breeders’ Cup and was the favorite in the race. It’s extraordinary how long he lasted at the top level. It’s a credit to Mr. and Mrs. Generazio and their breeding program.”

A multiple graded stakes winner, Pure Sensation picked up stakes wins in six consecutive seasons, from his 3-year-old year to age eight. He won the GIII Turf Monster H. at Parx in 2015, 2017, 2018 and 2019, the GIII Parx Dash S. in 2016, 2018 and 2019 and the GIII Jaipur Invitational S. in 2016 at Belmont. In that effort, he set a new six-furlong course record, later bettered by stablemate Disco Partner (Disco Rico) in the same race the following year. Disco Partner, another Generazio homebred, was retired to Rockridge Stud for the 2020 season.

“I’m not sure what Mr. Generazio would like to do yet, whether he wants him retired to the farm or if we can use him as a pony at the track because he would be a very popular pony if I can take him with us to Payson Park,” added Clement about plans for Pure Sensation’s post-racing life.