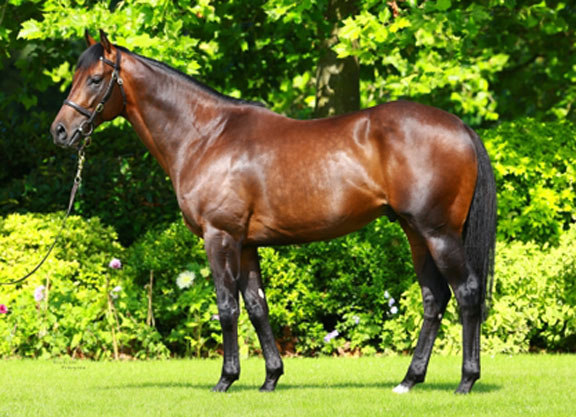 Sheikh Mohammed Obaid Al Maktoum's homebred 2-year-old colt Razzle Dazzle (GB) (Muhaarar {GB}) finished clear of the remainder when a promising debut second over Newmarket July's seven-furlong strip in his Aug. 6 debut last time and stepped forward to claim 'TDN Rising Stardom' with a most taking display in Friday's MansionBet Watch And Bet British EBF Novice S. back over the same course and distance. The Richard Hannon trainee and 10-11 favourite was swiftly into stride, despite jinking right at the break, and gained an immediate lead. In command throughout, he had all rivals on the stretch when bounding clear approaching the final furlong and extended his buffer under mild coaxing up the hill to outclass Unilateralism (Ire) (Starspangledbanner {Aus}) by an impressive 5 1/2 lengths.

“He is a lovely, big colt and I thought he would run well first time–and he duly did–and he would have improved for that,” commented trainer Richard Hannon. “He shaped with lots of promise first time and was still making up ground going to the line. I was even more pleased today, as he jumped out and was not keen, and he looked a very good horse out there in front. Let's see how he comes out of the race, he is in all the big races and has entries in the [G2] Champagne, [G2] Royal Lodge and [G1] Dewhurst. We will talk to Sheikh Obaid and decide what to do. It is all about next year with him, not about getting it while you can, as he is a long-term project.”

Razzle Dazzle, whose advance entries include an engagement in the Oct. 9 G1 Dewhurst S., is the sixth of seven foals and fourth scorer produced by an unraced granddaughter of G3 Prix du Bois victrix The Perfect Life (Ire) (Try My Best), herself a full-sister to MG1SW sire Last Tycoon (Ire) and the dam of G3 Gordon S.-winning sire Rabah (GB) (Nashwan) and G1 Cheveley Park S. third Najiya (GB) (Nashwan). The Perfect Life is also kin to MGSW sire Astronef (Ire) (Be My Guest) and to the dams of G1SW distaffers Immortal Verse (Ire) (Pivotal {GB}), Tie Black (Ire) (Machiavellian), Valentine Waltz (Ire) (Be Mu Guest) and Sense of Style (Thunder Gulch). The March-foaled homebred bay is full to a yearling colt.