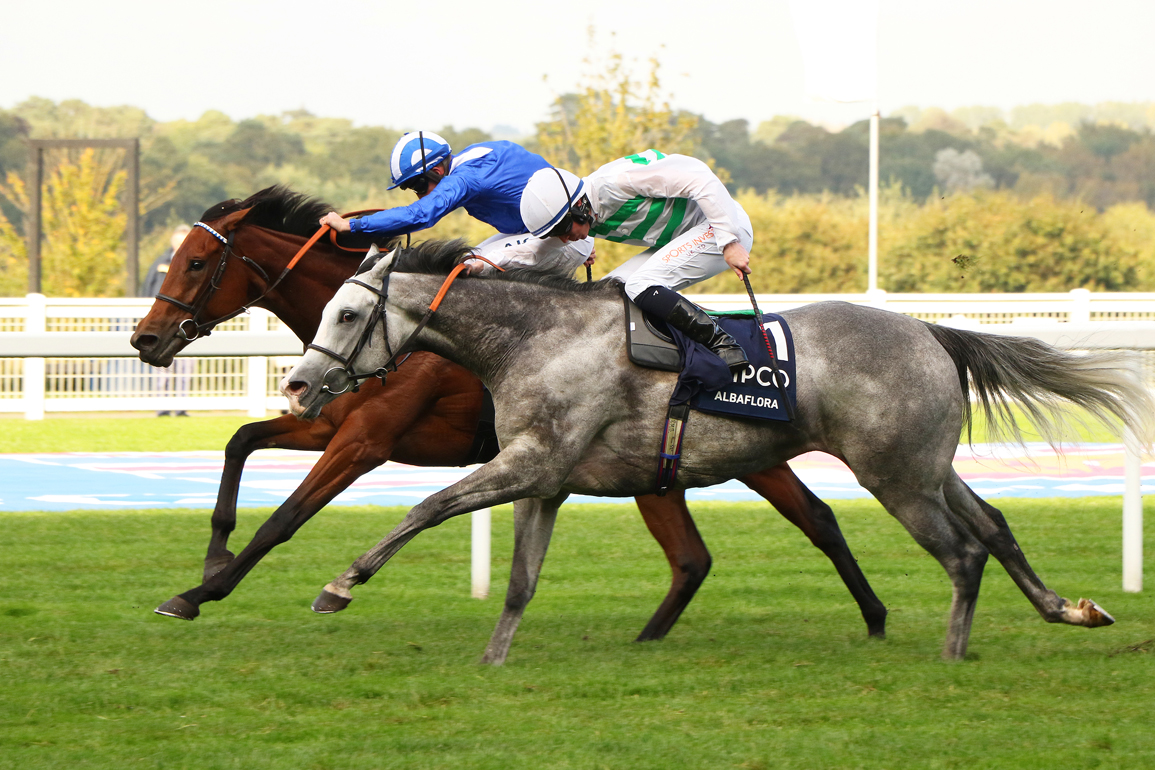 Saturday's G1 QIPCO British Champions Fillies & Mares S. was all about Snowfall (Jpn) (Deep Impact {Jpn}) beforehand, but in the end it proved as a showcase for Shadwell's Muhaarar (GB) whose daughters Eshaada (GB) and Albaflora (GB) fought out a thriller. Moving forward dramatically from a poor effort in the Aug. 19 G1 Yorkshire Oaks, Eshaada was 16-1 to provide the upset for the Roger Varian stable returning to Ascot where she had finished second in the June 17 G2 Ribblesdale S. Settled in a clear third early by Jim Crowley, the homebred who had taken the Listed Haras de Bouquetot Fillies' Trial at Newbury May 15 stayed on to gain the lead two out and despite the game effort of Albaflora clung on for a short-head verdict, with the 8-11 favourite Snowfall 3 1/2 lengths away in third. “She loves cut in the ground, had track form and has always looked a class filly, so I thought she was a touch over-priced,” Varian commented. “She had to be really tough and stuck her neck out and was very game.”

Eshaada, who had been beaten 3/4 of a length by the subsequent G1 Prix de Royallieu winner Loving Dream (GB) (Gleneagles {Ire}) in the course-and-distance Ribblesdale, had finished last of seven in the Yorkshire Oaks as Snowfall dominated Albaflora and Loving Dream had been sixth. An entirely different proposition in this race staged in contrasting conditions, the bay proved what can happen in only a matter of weeks as fillies begin to strengthen heading to the autumn. “York was her only poor performance and the Ribblesdale form had worked out very well two weeks ago,” Varian said. “Everything went right today and she always had a good position. The discussion as to whether she will stay in training will be had with the team at Shadwell, but obviously I'd like to have her around for another year. She's a great big, scopy filly who is very lightly-raced, so you'd think her best days are perhaps still ahead of her. She doesn't look like a sprinter–she is leggy with plenty of stamina on the dam's side and Muhaarar seem to be getting a bit beyond sprint distances.”

Jim Crowley said, “I had a very willing partner–she tried very hard and loves that ground. She was unlucky here at Royal Ascot, I just got a bit far back on her but we had the perfect trip round today and she toughed it out.” Ralph Beckett said of Albaflora, “It was just a very good horserace, wasn't it? I'm thrilled with her, but disappointed to run so well and not win! We were beaten by a better filly on the day, it's as simple as that. She's a good filly and it was a great effort by both of them.”

Aidan O'Brien said of the beaten favourite, “She ran an okay race, obviously you would be disappointed she didn't win. She's had plenty of racing and it was a steadily-enough run race. They quickened and she followed them, but she just didn't get to them. Ryan said he would have preferred the pace to be a bit stronger early. Snowfall was slow away and didn't want to come out and around them. There you go–that's the way it is. We'll see how she is, but that is probably it this year.”