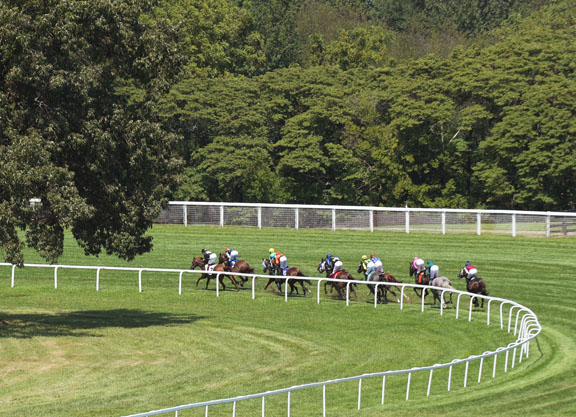 Purse levels for maiden special weight (MSW) races on the Kentucky circuit are projected to push past the $100,000 mark both during GI Kentucky Derby week at Churchill Downs and in September at the Kentucky Downs all-turf meet.

In addition, Kentucky Downs plans to expand its stakes program to include two new $1 million races in 2021, giving the venue a total of three stakes at that level. (Read more details here).

Ben Huffman, the director of racing at Churchill Downs, confirmed during a video meeting of the Kentucky Thoroughbred Development Fund (KTDF) advisory committee Apr. 6 that MSW purses during Derby week will be $106,000, then $91,000 for the balance of the meet that runs through June 26.

Churchill had closed out its pandemic-affected 2020 spring/summer season at the $79,000 level for MSW races and had boosted those purses to $97,000 for the rescheduled Derby week in September. The balance of September had $75,000 MSW purses; that level rose to $85,000 for the late-autumn meet that ended in November.

Ted Nicholson, the senior vice president and general manager at Kentucky Downs, told the KTDF board that his track's MSW level will be $125,000 for the six-day meet Sep. 5-12. That's up from $90,000 last year.

As for Ellis Park, racing secretary Dan Bork said that “our maidens will probably be just north of $50,000 this year.”

The MSW purse levels for the state's remaining 2021 meets beyond September will be discussed by the KTDF at a later date.

The Dirt on Turfway: Not Any Time Soon

Turfway Park's general manager, Chip Bach, updated the KTDF board on the near-term maintenance for the new Tapeta track that was unveiled in December. He also responded to a KTDF board member's question about the timeline for a proposed inner dirt track by saying it wasn't going to happen anytime soon.

“The opinion of the Tapeta surface has continued to be very positive,” Bach said. “There are some plans to do a tune-up, a little remediation. You know, when you're working with a synthetic racetrack, if you do too much too soon you can't undo it. And so they're typically conservative of the elements that they introduce into the surface; see how it responds to weather, see how it responds to the horses.

Bach described that process as a “tweak,” adding that the work is likely to be done before July, when horses resume training at Turfway.

As for the additional dirt surface inside the Tapeta course that was proposed as part of the ongoing Turfway rebuild, Bach said this:

“The project that's going on right now will contemplate the ability to put an inner dirt track within the synthetic oval. But that's not intended to happen the first or the second year [of the Turfway rebuild]. We'll have the ability to add that if we decide to. It's being designed with that in mind. But there are no plans for a dirt track in the near future.”

Jeff Inman, the general manager at Ellis Entertainment LLC, said his track is in the midst of a three-phase capital improvement plan.

Phase 1 work that is now underway prior to the track's June 27 opening includes drainage and safety improvements to the main track, a backstretch rebuild of the manure pit (required by environmental officials), a new restaurant and an additional bar on the frontside, plus high-definition camera and communication upgrades.

Bill Landes III, the chair of the KTDF advisory committee, wanted to know more about the list of long-term improvements Ellis has slated for the future.

“When do you think that schedule may be fleshed out?” Landes asked. “I love everything [listed]—turf widening, track lighting, grandstand improvements, new tote board—all of them long overdue, and everybody knows it.”

Inman replied that the turf course widening is likely to happen first, but not until after the 2021 meet.

“If we regain capital funding, we will start work after the horses leave, [by] late October, early November,” Inman said.

Landes underscored what a positive it would be to upgrade the grass course and to add lights at Ellis, because it would allow the track to card some twilight racing in a less-crowded simulcast time slot and feature more grass racing, which is popular with bettors because of the generally larger fields. Racing later in the day could also aid horse health by avoiding running during the searing late-afternoon temperatures that are routine at Ellis in the summer.

Landes said he believed Kentucky Horsemen's Benevolent and Protective Association officials would agree with him that if “you get twilight racing at Ellis Park and some lights there, there ain't no telling” what might happen, handle-wise. “That would be super—I'm sorry we're not there yet,” he added.

KTDF member J. David Richardson concurred: “I do believe Ellis Park has enormous potential to do much, much better with at least some opportunity to run under lights and expand turf racing on a course that's not torn up because you have to overuse it.”

But when asked for his opinion, Rick Hiles, the president of the KHBPA (and also a KTDF advisory committee member), said he was “a little concerned” about the ramifications of moving to later post times at Ellis.

Hiles cited the long days that outfits shipping to Ellis from Lexington and Louisville would have to endure.

“Losing an hour in time zones, coming back late at night…I just don't know how [horsemen] are going to react to that,” Hiles said.

“Well, you have that issue to a certain extent at Turfway,” Landes replied, meaning the night racing. “And [at Ellis] it's either coming in at one or two o'clock in the morning or dealing with 108 or 110 degrees” while shipping before the sun goes down.