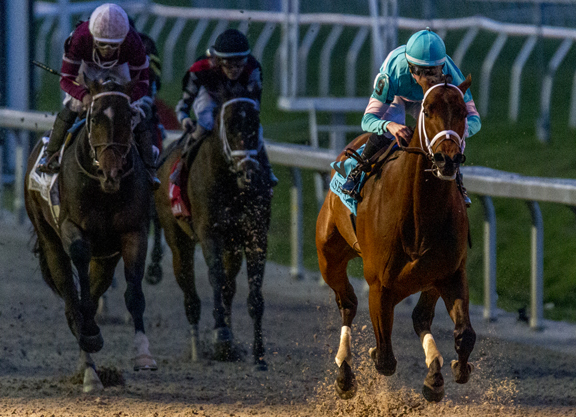 Mr. Monomoy (Palace Malice), whose win in the GII Risen Star S. signaled that he was a major threat for the GI Kentucky Derby, has suffered a mild injury and won't return to the races until this summer.

“He came out of a gallop two days ago with some heat in his ankle,” trainer Brad Cox said. “We took some x-rays and found that there was some roughening in the P1 (first phalanx) area. He'll need 60 days off and is on his way to WinStar to recuperate. He is off the Derby Trail and we hope to get him back this summer.”

Though Mr. Monomoy could be ready for races like the GI Travers S., missing out on a chance to win the Derby was a big blow to his connections. A half-brother to champion Monomoy Girl (Tapizar) and a 'TDN Rising Star', Mr. Monomoy took a while to put it all together, but appeared ready to live up to his vast potential. He originally sold for $60,000 at the 2017 Keeneland November Breeding Stock Sale and then for $202,230 in France at the 2019 Arqana May 2-Year-Old Breeze Up sale.

“When he came over from France to Bruce Jackson, he was so backwards and so green,” said Liz Crow, a partner in BSW/Crow Bloodstock, which helps manage Mr. Monomoy. “It seems like every week he has gotten better. Even in the paddock for his maiden race at Keeneland, he was a mess. He was bucking, kicking and didn't know what racing is all about. He's improved every single week since then and the Risen Star was when he finally put it all together. We were super excited about everything to come over the next several months. The time off should do him well. He's run every month the last five months. If we do right by him, I think he'll do right by us down the road.”

Crow said that Cox had become so optimistic about Mr. Monomoy's future that he was talking about running him in some of the biggest races in the world.

“Brad thinks a lot of this horse,” Crow said. “We want to do the right thing by him because we think we he has a lot of big races ahead of him. He even mentioned pointing to the Saudi Cup next year. We think he is the real deal. We're lucky we caught this so early and it didn't turn into anything bigger.”

Mr. Monomoy, who was also third in the GIII Lecomte S., is owned by the partnership of Madaket Stables, Michael Dubb and Doheny Racing Stable.

While Mr. Monomoy is headed to the sidelines, Monomoy Girl is gearing up for her comeback. Unraced since winning the 2018 GI Breeders' Cup Distaff, she had her first workout of 2020 when breezing three furlongs in :37.60 (6/8) Friday at Fair Grounds.

“She's doing really well,” Crow said. “Obviously, we have a long way to go but we are really excited about how she is doing right now.”