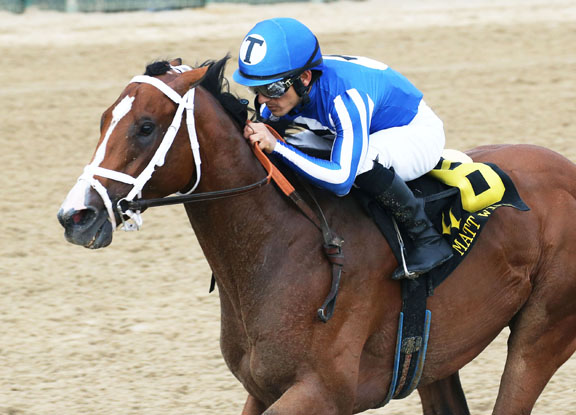 Some intrigue was added at the post-position draw for Saturday’s night’s $500,000 GIII Indiana Derby at Indiana Grand, as the two contenders expected to take the bulk of the play drew the two widest posts in the 11-horse group. While Mr. Money (Goldencents) and Math Wizard (Algorithms) still figure to take some beating, the uncertainty added opens the door for several better-drawn rivals in the 1 1/16-mile test.

Allied Racing Stable’s Mr. Money was entered in the GI Sentient Jet Breeders’ Cup Juvenile off of a maiden victory last fall and acquitted himself well, running fourth behind champion Game Winner (Candy Ride {Arg}) at 41-1. Unable to make a dent on the Triple Crown trail when seventh in the GII Risen Star S. and fifth in the GII Louisiana Derby, the $130,000 KEESEP buy was rerouted to the GIII Pat Day Mile S., which he won authoritatively by 5 1/4 lengths over Hog Creek Hustle (Overanalyze), who returned to upset the GI Woody Stephens S. Backed down to 3-5 in the GIII Matt Winn S. June 15, the bay didn’t disappoint, skipping clear to a 6 1/2-length romp. A versatile sort, he likely will have to use his early speed to get over from the 11-hole here.

Math Wizard, claimed for $16,000 from trainer Daniel Sanner when third behind Maximum Security (New Year’s Day) in that one’s debut romp Dec. 20 at Gulfstream, was plucked from Antonio Sano for the same price out of a 6 3/4-length maiden score Jan. 6. Paul Kopaj bumped the horse up into a $25,000 seller, where he won by 18 1/2 lengths and was claimed once more by Saffie Joseph, Jr. He’s taken no such chances with the chestnut and the colt rewarded him with a fourth at 64-1 in the GII Wood Memorial S. Fourth again in the Oaklawn Invitational S. May 4, he ran huge when removing blinkers in the GIII Ohio Derby, making an early move and duking it out all the way to the wire with tripped-out favorite and likely GI Runhappy Travers S. contender Owendale (Into Mischief) before falling a half-length short.

Runnymede Racing’s Alwaysmining (Stay Thirsty) and Willis Horton Racing’s Lone Range Toddy (Take Charge Indy) will both try to rediscover past form. The former, who won six straight races at Laurel between October and April, backed up to finish 11th in the GI Preakness S. and was third at even-money last out in the Easy Goer S. at Belmont. The latter, upset victor of the GII Rebel S. Mar. 16, was off the board in the GI Arkansas Derby and GI Kentucky Derby and no match for Math Wizard when a well-beaten third in the Ohio Derby.

Gray Magician (Graydar), distant runner-up to Alwaysmining in the Miracle Wood S., improved to be a close second in the G2 UAE Derby, but was last of 19 in the Run for the Roses. He figures to be forwardly placed in a race lacking abundant speed. That potential dearth of pace could cost Roiland (Successful Appeal). The late runner passed 11 horses to be third at 69-1 in the Risen Star behind Kentucky Derby winner Country House (Lookin At Lucky) and Preakness hero War of Will (War Front). He was last seen running a fast-finishing fifth in the Oaklawn Invitational.