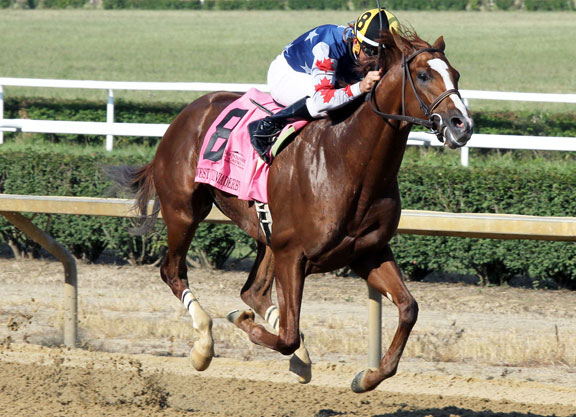 The chestnut was sent off at 9-1 for each of his first two career appearances, a debut success in a seven-furlong Keeneland maiden Apr. 20 and a half-length tally going two turns over the Churchill main track June 2. Tested for class in the July 6 Iowa Derby, he settled handy to the pace while three wide and was gaining inches late en route to a runner-up effort behind High North.

Ridden for pace this time around by Robby Albarado, Mr Freeze cleared his rivals and dropped down nearer the inside racing into the clubhouse turn. Nursed along from there, the $75,000 Keeneland September purchase kicked further in front off the home turn and was never in any sort of danger. Draft Pick, narrowly defeated by Once On Whiskey (Bodemeister) in the GIII Los Alamitos Derby July 14, rallied late for second. Once On Whiskey sat a midpack trip, but was beaten three furlongs from home and finished a listless fifth.

Mr Freeze is the first graded winner for To Honor and Serve, who was recently expatriated to stand stud in Korea, where his eight winners from 15 runners include champion and million-dollar earner Cheongdam Dokki. The unraced Heavenly Cat was a hit at stud, producing three full stakes winners-two graded winners-and a stakes-placed runner from her first four foals to make the races. Mr Freeze's 9-year-old half-sister Zayanna (Bernardini) has kept the family streak alive, producing SW Velvet Mood (Lonhro {Aus}) and SP Admiral Jimmy (Jimmy Creed) from her first two foals to race. The current 2-year-old filly Up At Dawn (Uncle Mo) is the last listed produce for Heavenly Cat.