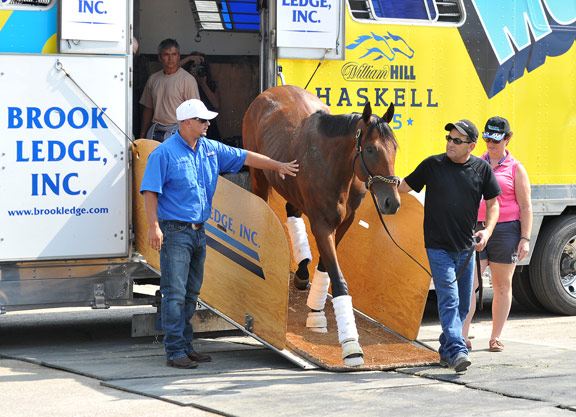 Shortly after 4 p.m. Wednesday afternoon, Triple Crown hero American Pharoah (Pioneerof the Nile) took his first step towards the last half of a brilliant sophomore campaign as he arrived on the Monmouth Park backside.

The Zayat homebred, who will contest Sunday's GI William Hill Haskell Invitational, left his homebase at Del Mar around 1:30 a.m. and departed from the Ontario, California airport en route to Lexington where the plane refueled. American Pharoah and his entourage touched down at the Atlantic City Airport around 2:00 p.m. and, with a police escort, was vanned up the Garden State Parkway to Monmouth Park.

“I couldn't be happier with the way he looks,” trainer Bob Baffert's assistant Jimmy Barnes said outside of Kelly Breen's barn, where American Pharoah will reside during his stay in New Jersey. “I'm very happy, he's shipped very well and has settled right in. He's a very smart horse, he'll adjust no problem whatsoever.”

The Brook Ledge trailer itself was a showstopper, decked out the Zayat yellow and light blue with “Welcome to Monmouth Park” and “American Pharoah 2015 Triple Crown Winner” stamped along the sides. After stepping off van, American Pharoah, with Barnes on the shank, took a few laps around the pathway before taking a quick drink and heading into the shedrow. Regular exercise rider George Alverez gave the bay a few turns around the barn before heading outside for his bath. Pharoah calmly stood for his bath/photo-op, before heading back into the shedrow and settling into his stall in Barn 12.

Breen, too, was excited about the arrival of the Triple Crown winner.

“It's great for the state of New Jersey and for Monmouth Park,” he said. “He's a rockstar. It's amazing [to have him in the barn].”