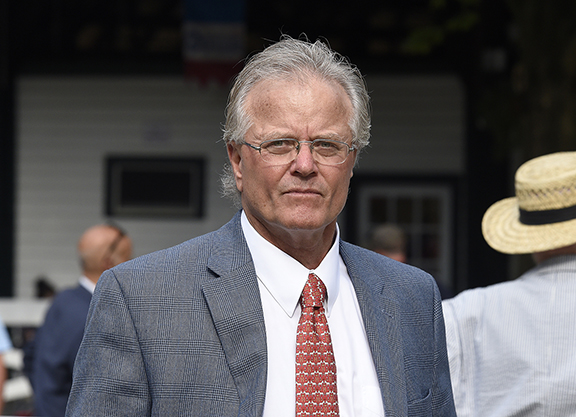 Hall-of-Fame trainer Bill Mott is dropping a civil lawsuit against the New York State Gaming Commission (NYSGC) and will serve a renegotiated seven-day suspension and pay a $1,000 fine related to a 2014 medication overage in one of his trainees.

The news was first reported by Daily Racing Form on Monday. TDN confirmed it via phone with Mott’s attorney, Andrew Mollica, who was emphatic that the nearly four-year legal fight represents a larger victory for horsemen. He said the challenges Mott presented in court helped bring about a protocol change in November 2017 that now gives New York horsemen the option of sending a “referee sample” to an independent lab to verify allegedly positive results.

It was the lack of such a referee sample that ensnarled Mott in a four-year legal odyssey to clear his name after Saratoga Snacks (Tale of the Cat), finished sixth and last at Belmont Park on Sept. 20, 2014, and the post-race drug tests came back showing alleged overages of furosemide (Lasix) and flunixin (Banamine). When Mott attempted to obtain a split sample from New York’s contracted testing lab to have his own independent testing done, Mollica said his client was not provided with one because the sample size was either inadequate or had been destroyed.

“Bill Mott fought this legal battle not just for himself, but for the entire industry. And it’s only guys like him who can fight for the betterment of us all,” Mollica said. “But this lawsuit–and this is what I want to get out–exposed the flaws and the unconstitutional practices of this commission.”

In January, the NYSGC voted to concur with a hearing officer’s recommendation that Mott was not responsible the original improper third-party administration of Lasix, but that he was responsible for the Banamine overage. Yet based on the Banamine overage responsibility alone, the NYSGC still voted to uphold the original 15-day suspension and $1,000 fine handed down by the Belmont stewards.

At that time, Mollica called the revised NYSGC ruling a “travesty of justice” and vowed that his client would continue to fight it in court. But Mollica explained on Monday that Mott has since reconsidered whether it is cost-effective to press forward with the civil suit, which the Form reported has already cost him in the “low six figures” in legal fees.

“Bill decided that he wanted the fight behind him because we were facing two, three or four more years of litigation,” Mollica said. “We would have probably ended up in the Court of Appeals, which is the highest court in New York. If we won at the lower court the gaming commission was going to appeal. If we lost, we were going to appeal. At the end of the day, Bill felt like we changed the practices of the industry. We feel like we won the war but lost the battle.”

Mott will serve his suspension July 5-11, Mollica said. The Form reported that the renegotiated penalty (15 days to seven) is conditional upon Mott not incurring another medication violation for a one-year period.

“The judge helped facilitate the settlement, but the taking of the days, we arranged it with the state steward,” Mollica added.

Mollica also underscored how horsemen have to continue to push for transparency at the NYSGC.

“The fight is just beginning,” Mollica said. “We’ve got to get threshold levels that mean something and have science behind them. We have to get split-sample testing that means if the [referee sample] comes back different, you’re exonerated. You shouldn’t have to litigate it. The gaming commission was hiding the ball for two decades. They can’t do that anymore.”

Mollica continued: “We are hoping that the new New York Thoroughbred Horsemen’s Association board demands that the gaming commission stops this stuff. I’m going to lobby the gaming commission on behalf of Bill, and we need to get [elected horsemen’s representatives] who will challenge this authority and not just roll over. Because while everybody talks about integrity in racing, we need integrity on the [regulatory] side, too. We need gaming commissions to start acting responsibly, and not just hanging people for the sake of hanging them.”