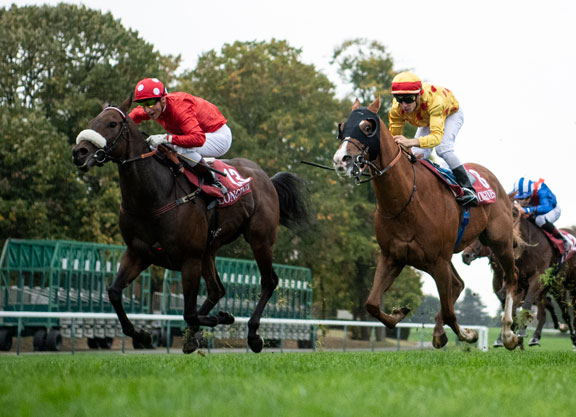 Gerald Mosse will renew his association with star sprinter Mabs Cross (GB) (Dutch Art {GB}) in the G1 Coolmore Nunthorpe S. at York on Aug. 23. In the absence of the sidelined Paul Mulrennan, the veteran French jockey stepped in to steer the Michael Dods-trained mare to Group 1 glory in last October's Prix de l'Abbaye at ParisLongchamp. Having since returned from injury, Mulrennan has been on board the 5-year-old for each of her three outings this season–most recently finishing fourth behind the now-retired Blue Point (Ire) (Shamardal) in the G1 Diamond Jubilee at Royal Ascot. However, owner David Armstrong is keen for Mosse to get back in the saddle on the Knavesmire on Friday–with the autumn defence of her crown in the Abbaye already in mind.

Dods said, “Obviously the owner is thinking of the Abbaye. Gerald Mosse won the Abbaye on her last year–and if he can ride her in France again, that is a big plus. It's tough for Paul, but the owner is looking at the bigger picture.”

Of Mabs Cross, the trainer added, “I'm very happy with her at the moment.”

Mulrennan has steered Mabs Cross to six of her seven career victories–and while disappointed to lose the ride, he is philosophical about the situation.

He told Racing TV: “She is a fantastic mare, and it's always been a pleasure to ride her. She has been working well in the last couple of weeks–and I will obviously still be cheering her on, if I don't have another ride in the race.

“Her owners have obviously decided to take me off. But they are entitled to their choice, and I'm not the first jockey in the world–and I won't be the last either–to lose a big ride like this.”

Mabs Cross will be bidding to provide Dods with a third Nunthorpe success, after he saddled Mecca's Angel (Ire) (Dark Angel {Ire}) to land back-to-back renewals in 2015 and 2016 under Mulrennan. Mabs Cross came close to claiming victory 12 months ago in the hands of Tom Eaves, going down by just a nose to Bryan Smart's Alpha Delphini (GB) (Captain Gerrard {Ire}).