Morton Fink, Breeder and Owner of Wise Dan, Dies at 89 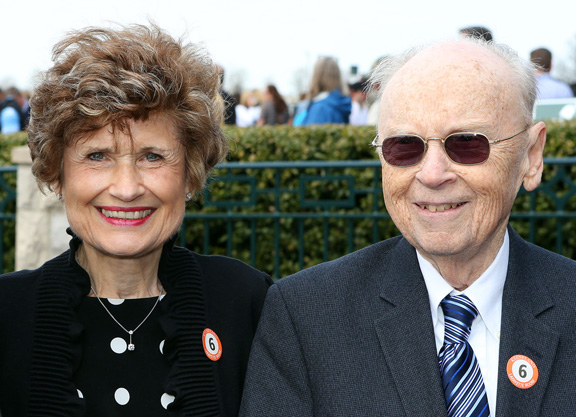 Morton Fink, an Illinois-based Thoroughbred owner and breeder for nearly five decades best known for getting his lone remaining broodmare to produce two-time Horse of the Year winner Wise Dan, died Nov. 20, according to a notice posted by the Shalom Memorial Funeral Home, which is handling his services.

Fink was two weeks shy of his 90th birthday. No cause of death was listed, but Horse Racing Nation reported that late in life Fink had been undergoing dialysis treatments.

According to a 2013 profile in Trainer magazine, Fink, a lifelong Chicago-area native, first got introduced to the sport by accompanying his mother to the races.

After graduating from Roosevelt University with a degree in business administration, Fink inherited a group of movie theaters from his father and eventually sold them to a national chain. Around 1971, he and a group of friends claimed a horse for $4,000. That runner never won a race, but the experience hooked Fink on the sport for life.

A few years later, Fink and a business partner, Roy Gottlieb, teamed up to form Carelaine Farm, named after a combination of their wives' names. According to the Trainer profile, Carelaine Farms bred and raced the MGISW mare Annoconnor (named to honor a deceased employee) and bred Producer, a Group 1 winner in Europe who sold in foal to Northern Dancer for $5.25 million in 1983.

By the mid-1990s Carelaine Farms disbanded. Fink continued to own and breed horses on his own–primarily, he said, so he could watch them run close to home at Arlington Park.

But within a decade, Fink began to downsize his own operations.

In 1995, Fink bought a Wolf Power (SAF) mare for $29,000 at the 1995 Keeneland September sale. He named her Lisa Danielle, after his granddaughter. She won only one race, breaking her maiden at Arlington, and Fink later admitted he kept her as his last remaining broodmare after her racing career was over primarily for sentimental reasons.

Fink bred Lisa Danielle to a series of modest stallions, and a 2007 mating to Wiseman's Ferry produced the MGISW Wise Dan, who won 23 of 31 races over a 4 1/2-year racing career while emerging as America's dominant turf miler of the 2010s decade. Wise Dan won the GI Breeders' Cup Mile in both 2012 and 2013, and in each of those years he swept an Eclipse Awards trifecta by being named Champion Older Horse, Champion Grass Horse, and Horse of the Year.

“When you get to be my age, you need something to get up in the morning and look forward to,” Fink said in his 2012 Eclipse Awards acceptance speech. “This horse has made me so happy that I can't even express it in words.”

A year later, after his 2013 Eclipse Awards wins, Fink told the Chicago Tribune “I was in it strictly for fun when I started out. The first horse I got into was with a group of 10 guys. We got lucky on some of our breeding and bought better horses. But I never had any idea I'd ever have a horse like this.”

Charlie LoPresti, who trained Wise Dan and other horses for Fink, remembered him as a horse-first, hands-off type of owner.

“Basically, he never put any pressure on me,” LoPresti told Horse Racing Nation. “He let me manage [Wise Dan], train him how I saw fit, and run him where I wanted to run. There was never any concrete schedule, or a gun held to my head…. Those kind of owners, there are very few anymore. He was a dream to work for.”

Services for Fink will be held Monday, Nov. 25, at 2:30 p.m. at Shalom Memorial Funeral Home in Arlington Heights, Illinois. A remembrance guestbook, plus details on internment and shiva, are available here.