More Than Ready Gelding Has Last 'Word' in Northern Dancer 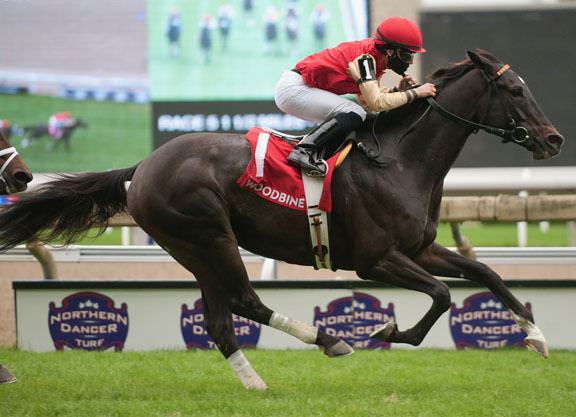 Say the Word uncorked a last-to-first rally in Sunday's GI Northern Dancer S. at Woodbine to post a mild upset. The dark bay dropped out the back under Emma-Jayne Wilson as favorite Admiralty Pier did as he pleased up front. He was ridden for more to inch slightly closer heading for the home as stablemate and fellow Sam-Son representative Count Again (Awesome Again) took the first run at the pacesetter. Admiralty Pier and Count Again continued to trade jabs to midstretch, but neither had any response for Say the Word as he blew to the front over the top with Sir Sahib (Fort Larned) mirroring that move to complete the exacta.

“It was perfect actually,” Wilson said of her trip. “The first time I rode him, [trainer Gail Cox] let me know that Junior Alvarado from Saratoga had said that he was funny with his mouth, he could be a little sensitive and to trip him [out] in a certain sort of way. Last time, we got the on -hole going a mile and a quarter, and I just got shuffled back. It took me a bit to just kind of get on the same page with him last time, being as sensitive as he was. I mean, he ran well, he ran third, but he was coming on end.

“So today, I was more confident with him, more ground and I knew where the line was with him for my hands and give and take. He settled for me beautifully; I literally just held the mane for pretty much the first mile and a quarter. Then as I gathered him up, I knew…I just knew. He was gaining on them last time and I just knew when he straightened, he was already in flight and it was going to be tough to beat him.”

Say the Word upended a 1 3/16-mile Saratoga optional claimer Aug. 14 at 51-1 while being offered up for the $62,500 tag. He was most recently third behind Count Again and Sir Sahib in the 10-panel GIII Singspiel S. here Sept. 19. His lone 1 1/2-mile outing came when second in the 2018 Breeders' S. here while under the tutelage of Graham Motion. Say the Word made two starts for Gail Cox last fall, including a fourth in the GIII Durham Cup on this main track. He was then off the board in a trio of tries for Neil Howard at Fair Grounds, and returned to the Cox barn to be sixth in a local optional claimer June 20.

“I think this horse kind of likes to know the people that he's with, so he's not one that's easy to shift around all the time,” Cox said. “He also loves this turf course and he loved the distance. Last year, he was sent to me and we ran him on the Tapeta, and it was not to his liking.”

Say the Word is the 25th highest-level winner (92nd graded/group winner) for international sensation More Than Ready) and is out of a Giant's Causeway mare like MGISW Verrazano. He is one of 26 Grade I/Group 1 winners out of Giant's Causeway dams. Say the Word's third dam is none other than legendary Hall of Famer Dance Smartly. This is the extremely productive female family of Smart Strike, Dancethrudawn, et al. Danceforthecause, whose 4-year-old son Rideforthecause was fourth in the GI E.P. Taylor S. two races later on the card, produced a Distorted Humor fily in 2019 and a Street Sense filly this term. She was bred back to Twirling Candy.