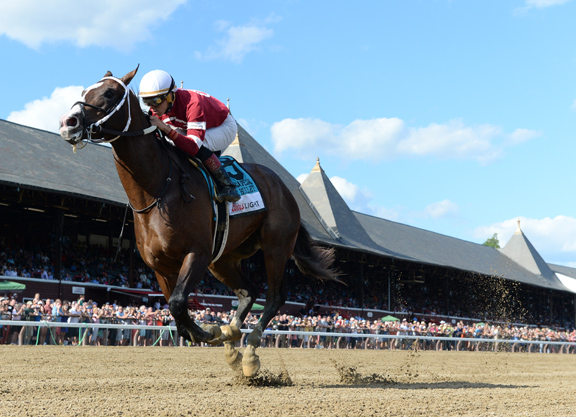 Copper Bullet (More Than Ready) stalked, pounced and powered clear a convincing winner of the GII Saratoga Special S. Sunday afternoon. Away cleanly from the widest draw, the bay colt tracked the well-regarded pair of fellow 'TDN Rising Stars' Mo Diddley (Uncle Mo) and Barry Lee (Violence) while perched three deep. He took over after a half in :44.72, and showed off a big, powerful stride as he kicked away from his competition by four lengths, stopping the clock in 1:16.45. Hollywood Star (Malibu Moon) completed a 'Rising Star' exacta, while longshot Tempestad (Uncle Mo) filled out the triple. Mo Diddley and Barry Lee faded to seventh and eighth, respectively. According to Trakus data, Copper Bullet covered the most ground in the field. Second on debut in Lexington Apr. 26, the $200,000 Keeneland September acquisition crushed Churchill maidens by eight lengths May 25, but settled for second behind another 'Rising Star' in Ten City (Run Away and Hide) in that venue's GIII Bashford Manor S. June 30 after a tiring rival backed up into him and forced him to steady.

“He broke good and put me in perfect position,” said winning pilot Irad Ortiz, Jr. amidst a four-win day. “Last time he missed the break, but this time I was in the clear. I let him be comfortable and when I asked him, he was there for me. The other horses had a little bit more speed than me, but he's a big horse. He's fast, but I didn't want to go that fast early. I just wanted to stalk and the trip worked out perfectly. When I asked him, he responded and did a great job. He finished good and I think he can go farther. We'll see what Steve [Asmussen] and the owners decide from here.”

Asmussen and co-owner Winchell Thoroughbreds won this race in 2003 with Cuvee, and teamed up last week to take the $1.2-million GI Whitney S. with Gun Runner (Candy Ride {Arg}).

“He ran a good race today, he really did,” said the Hall of Famer. “It was an excellent draw for him. He was a little playful in the paddock and stuff, but once he got on the track, he was all business. He broke very sharply, [they went] :21 3/5 down the backside, so I was a little concerned with how fast they were going, but I think the racing experience that he's had showed up.”

Asmussen continued, “He caused most of his own trouble that day [in the Bashford Manor] by not breaking like he's capable of and then trying to compensate for it. But, he broke well today, settled off of those horses that were going very fast and he went through the wire with good energy and in a nice final time. He's looked like the real deal and it's good to see him win a race at this level.”

Copper Bullet's second dam Louve Royale began her career in Europe, but was eventually acquired privately by Joe Allen. She was a three-time stakes winner on U.S. turf for trainer Patrick Biancone, including twice in stakes company. She checked in third in Saratoga's GIII Glens Falls H. in 2006. Louve Royale is a daughter of French Group 3 winner Louve, who also produced Loup Breton (Ire) (Anabaa), who was GSW and GISP on both sides of the Atlantic.

Copper Bullet's dam Allegory was 1 for 11 racing in both France and the States for Allen. She was claimed by Cory Patton for $22,000 out of her final start at Arlington in July of 2012, and bred to Smart Strike before selling to Dell Ridge Farm for $200,000 at the following year's Keeneland November sale. The resulting Smart Strike colt was a $160,000 KEESEP yearling in 2015, but later brought just $4,000 as an OBS June 2-year-old. Now named Irish Prospector, he scored his second-straight victory in claiming company at Presque Isle Downs Aug. 3. Allegory's yearling Verrazano colt is catalogued in the Keeneland September sale as hip 1921. She produced a Lemon Drop Kid filly this season before being bred back to Violence.