More Than $125k for Aftercare Raised by Inaugural 'Race to Give' 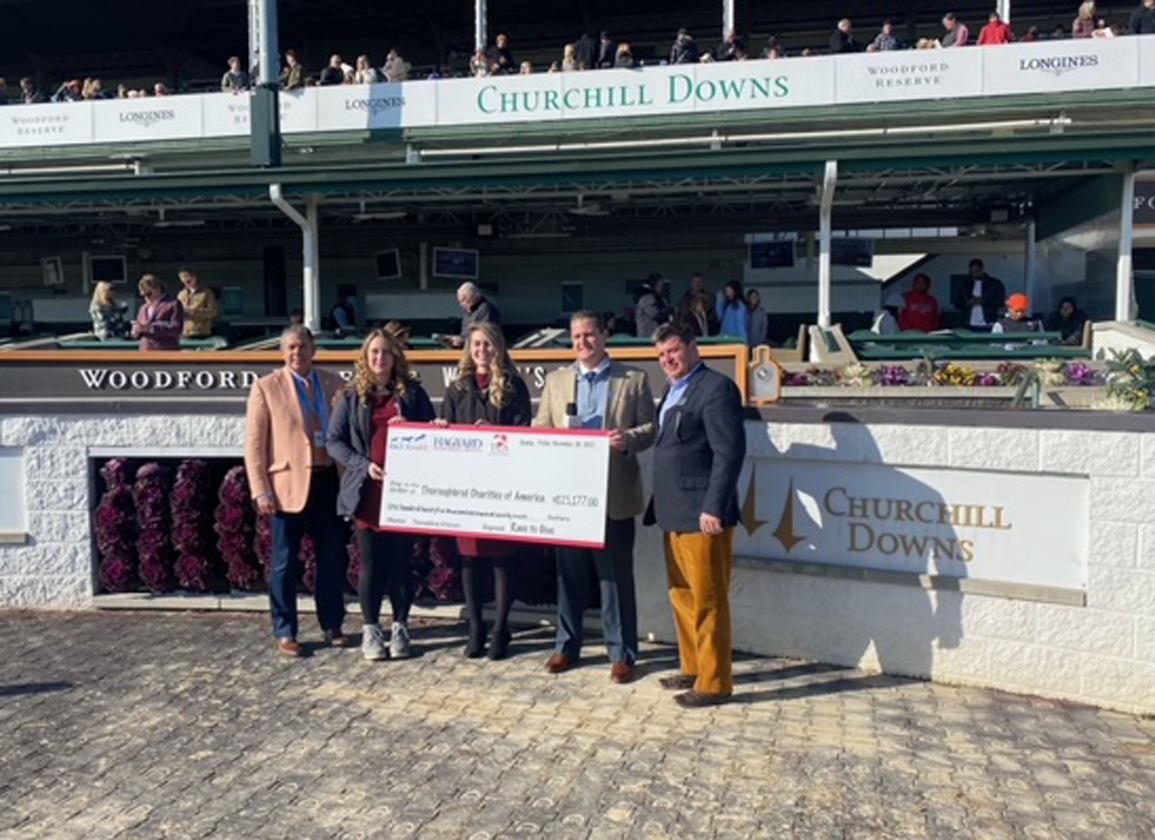 The first annual “Race to Give” campaign, begun in September by Hagyard Equine Medical Institute and Thoroughbred Charities of America (TCA) as an online giving and awareness program to support Thoroughbred aftercare, wrapped Friday with over $125,000 raised. Officials from Hagyard presented a check to TCA totaling $125,117 in a winner's circle ceremony at Churchill Downs.

“Starting a new charitable effort is always a challenge and usually takes some time to build momentum,” said Hagyard's Dr. Luke Fallon, DVM. “So we tried to set a realistic goal, but I think we underestimated people's passion for aftercare. Once the campaign got rolling we realized that a six-figure goal was not out of reach.”

Representatives from Hagyard thanked all participants who supported the effort, with a broad range of industry racing teams, farms, businesses, and organizations adding to the spirit of competition.

“As we mentioned at the launch of the campaign, competition is central to who and what we are as an industry. So we wanted to engineer competition into the Race to Give,” said Ken Ford, CEO of Hagyard Pharmacy. “It manifested itself in a number of fun sporting events, and the highly entertaining Run-A-Muck challenge where people were challenged to make a donation or muck a stall. I couldn't possibly list everybody who really leaned into the Race to Give, but seeing people like Carter Carnegie and Allie Sclafani get involved was just amazing.”

The fundraising effort also included corporate sponsors Thoroughbred Daily News (TDN), TVG, Resolvet, Keeneland, and Thoroughbred Aftercare Alliance (TAA). “Our industry partners were simply amazing,” Fallon continued. “And we have to give an additional shout out to Thoroughbred Daily News and TVG. They were extremely generous with their promotional space and their editorial content to help get the word out. For about six weeks, Race to Give was a significant part of the industry discussion.”

In addition to raising money for aftercare, Race to Give was also engineered to raise awareness for the importance of aftercare. With Thoroughbreds on average living another 20 years or more after retiring from racing, they can move into second careers in new disciplines such as eventing, hunter/jumpers, dressage, western, polo, trail riding, equine therapy, and much more. Thoroughbreds are extremely versatile and can often be retrained for multiple disciplines. Responsible owners can set their horse up for future success by retiring them into a TCA-approved and TAA-accredited aftercare program where they can be retrained for their next career.

“As we pause to think about what we're thankful for this week, I know one of things on my list is being part of an industry that understands the importance of the next career for Thoroughbreds,” said Mike McMahon, TCA President. “This check, and the hundreds of Race to Give participants who contributed, is clear evidence of the genuine love we all have for these animals.”

Detailed results of the Race to Give campaign can be found at RaceToGive.org.

“This year's campaign was truly amazing,” said Fallon. “Now just imagine what we can do with a whole year to plan for the 2022 campaign.”