More Success For Mehmas As Minzaal Dazzles In the Gimcrack 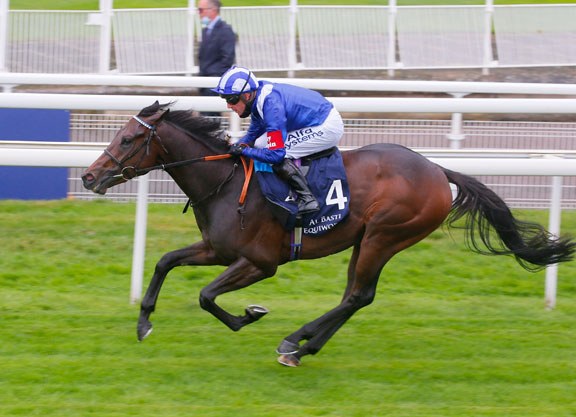 On a day when York belonged to the royal blue of Shadwell, the G2 Al Basti Equiworld Dubai Gimcrack S. played host to one of the operation's youngbloods as the new juvenile sprinting sensation Minzaal (Ire) (Mehmas {Ire}) cut a dash in the gloom. Sent off the 5-2 favourite coming off an impressive Salisbury novice success over this six-furlong trip Aug. 9, the bay missed the kick and was adrift early but Jim Crowley was oozing confidence and in no mood to hurry. Tanking his way to the lead passing the two-furlong pole, he drifted right but was far too good en route to clocking a quick time given the rain-softened conditions. Devilwala (Ire) (Kodiac {GB}) was two lengths back in second, with Mystery Smiles (Ire) (Mehmas {Ire}) 3/4 of a length further away in third. Tally Ho Stud's first-season sire now has a trio of stars in his first crop after Supremacy (Ire) and Method (Ire) and it is impossible at present to state unequivocally which holds the bragging rights. “He is ultra professional and was backing up quite quick, but didn't take much out of himself that day at Salisbury,” Crowley said after completing the third leg of his four-timer. “I couldn't believe the ease of the way he moved into the race and he's got a great mind which will stand him in good stead. It's nice to have found one and I think that's going to be his best trip. He's the sort of horse for the Commonwealth Cup next year.”

Fourth on debut behind Mohawk King (Ire) (Siyouni {Fr}) in Ascot's “Crocker Bulteel” maiden July 25, the bay had already taken a sizeable leap forward last time and this display suggests he will take high rank in the end-of-season standings. Trainer Owen Burrows said, “That was very straightforward. He didn't jump out very quick, but I don't think Jim wanted to set him alight in any case as he has so much speed. He just lets him find his rhythm and Jim said he couldn't believe how well he was going–if anything he got there too soon, but there was nothing else he could do. I think he's all speed, I don't think he needs to be going further than six furlongs, so we'll be looking [G1] Middle Park rather than Dewhurst and it will be straight there. I don't see him as a Guineas horse, more Commonwealth Cup and Jim thinks that, too.”

Minzaal's unraced dam Pardoven (Ire) (Clodovil {Ire}) is a half to four black-type performers headed by the G3 Gordon S. runner-up Firebet (Ire) (Dubai Destination). She is out of the Listed Lingfield Oaks Trial third Dancing Prize (Ire) (Sadler's Wells), who is a full-sister to the G1 Fillies' Mile runner-up Dance To the Top (GB). She is in turn responsible for the G2 Al Fahidi Fort winner and G1 Dubai Duty Free runner-up Bankable (Ire) (Medicean {GB}), while the third dam Aim For the Top (Irish River {Fr}) was successful in the G3 Premio Chiusura before also producing the dual listed winner and G1 Underwood S. runner-up Polar Bear (GB) (Polar Falcon). Pardoven's yearling filly is by Tamayuz (GB), while she also has a colt foal by Belardo (Ire).