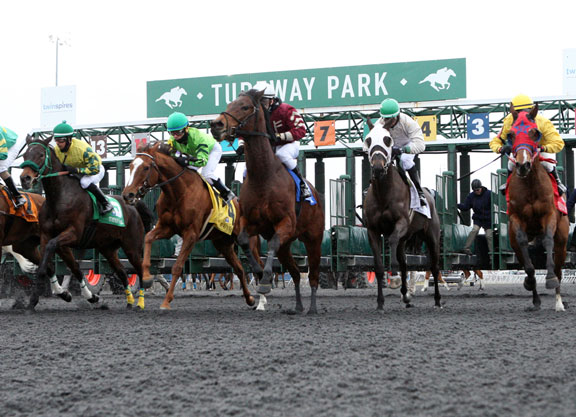 Turfway Park, currently in the midst of being demolished and rebuilt under new corporate ownership, is projecting 2,400 applications for 900 stalls for the upcoming 52-date combined holiday, winter, and spring meets that will open Dec. 2.

But even though a larger-than-usual number of Kentucky racing outfits are expected to remain at Turfway for the winter instead of shipping out to warmer-climate race meets, track officials told members of the Kentucky Thoroughbred Development Fund (KTDF) advisory committee during an Oct. 6 video meeting that purse expectations should be tempered because of decreased earnings projections, the COVID-19 pandemic, and ongoing construction work that will leave the facility without a grandstand for the entirety of its winter/spring racing season that runs through March.

It was one year ago this week that Churchill Downs, Inc. (CDI), announced its agreement to buy Turfway and invest $200 million in acquisitions and reconstruction costs that include a new Tapeta synthetic racing surface, a new grandstand and clubhouse, and an off-site wagering facility 12 miles to the northeast in Newport that will house simulcasting and historical horse racing (HHR) gaming machines.

Tom Minneci, the senior director of finance at CDI, told the KTDF board Tuesday that “we're trying to get as close as we can to what we offered last year” in daily average purses at Turfway.

But Bill Landes III, the chairman of the KTDF advisory committee, who represents the Kentucky Thoroughbred Owners and Breeders Association (KTOB) on the board, cautioned to journalists reporting on the meeting that “I don't know how actively I would report on that number” until more precise financial figures and a condition book are provided by CDI and Turfway officials.

J. David Richardson, who also represents the KTOB on the KTDF advisory committee, noted that “if you just listen to the rumble…there's a big feeling that this is going to be a lot different than last year,” with numerous outfits making plans to stay in Kentucky for the winter.

But, Richardson added, “I think there are some people whose expectations may be a little out of line with reality” considering all of the unknowns in the purse equation.

Minneci explained that “We are projecting lower earnings this year because of the funding [that Turfway received] last year from [CDI-owned] Derby City Gaming. But we will get funding from the new facility there in Newport. So the projected daily earnings are just under $41,000. Last year, with the funding from Derby City Gaming, the daily earnings were just north of $64,000.”

Turfway's current balance of KTDF funding is zero, Minneci said. The track requested between $1.9 and $2.4 million from the KTDF, and the board unanimously approved that request to be recommended to the full Kentucky Horse Racing Commission (KHRC) for final approval at its Oct. 20 meeting.

The KTDF board on Tuesday did not address last week's Kentucky State Supreme Court opinion regarding the apparent illegality of HHR that got remanded back to a lower court. HHR in Kentucky raked in $2.2 billion in revenues during the most recent fiscal year, and that form of gaming contributes tens of millions of dollars annually to purses.

Nevertheless, Turfway general manager Chip Bach said his track is forging ahead with plans for the upcoming racing season. He outlined the timing of operations and disclosed a few tweaks that are in the pipeline to try and improve both the product and the amenities.

Turfway's stabling opens Nov. 1, with training starting Nov. 3. The December “holiday” meet will consist of 13 programs, and Bach said Turfway has a request pending with the KHRC to switch its schedule from night racing on Wednesdays-Saturdays to nights on just Thursdays and Fridays and afternoons on Saturdays and Sundays.

The 39-date 2021 winter/spring meet picks up in January and will run through March (dates to be approved).

“Obviously, we will not have a grandstand,” Bach said. “We will have space for wagering…for the owners and trainers that come to see their horses run. But we will not have any public space available. And at the present we're working on those temporary structures and systems to conduct a live race meet, [like] judges' booths [and] photo-finish” facilities.

Bach added that, “We will be open at Newport Racing and Gaming, so we will have a [place to generate the] live handle” that helps to fund the KTDF.

“The Tapeta is in and ready to go,” Bach said. “There are a couple of things our maintenance team has to do in terms of turning it over every couple of weeks, but it's ready to go right now. It's beautiful. We're excited. The Polytrack, of course, was worn out, and we're really excited to see how this performs.”

Turfway, despite its name, has never had a turf course. But it CDI has designed plans to add an inner, seven-furlong dirt track at a later date if the gaming corporation wants to.

“As the new facility is being built, we are taking into consideration the ability to put a dirt track on the inside [of the Tapeta track],” Bach said. “I do not believe that is being contemplated for the first full year that we are open, but we will have the ability to create that dirt track. The lighting and all the electrical work is being designed to not only support the Tapeta one-mile track, but also a seven-eighths dirt track should we move forward with it.”

Marty Maline, the executive director of the Kentucky Horsemen's Benevolent and Protective Association, said most outfits are looking forward to wintering at Turfway, although he added that some long-time stables from Ohio that have traditionally supported winter racing in Kentucky could be out of luck in terms of getting stalls.

“There's a lot of excitement, A lot of people are deciding either to keep a string here or [stay] exclusively here,” Maline said. “I know some of those Belterra guys who have been there through thick and thin will probably be jettisoned off, I would imagine, because there are some very strong outfits that are contemplating staying all winter.”

Also at Tuesday's KTDF board meeting, Minneci told the board that Churchill Downs is “hoping to have spectators here at the track, depending what happens with COVID-19 and positivity rates” during its 24-date, Oct. 25-Nov. 29 meet.

Ben Huffman, the director of racing at Churchill, said “I'm really close to finalizing the condition book, probably by [Tuesday] evening or [Wednesday]. We're trying to get the MSW [purses] here for the fall meet somewhere between $80,000 and $85,000.”

The board unanimously approved $3 to $3.5 million in KTDF funding for Churchill's fall meet, pending the subsequent finalization by the KHRC.