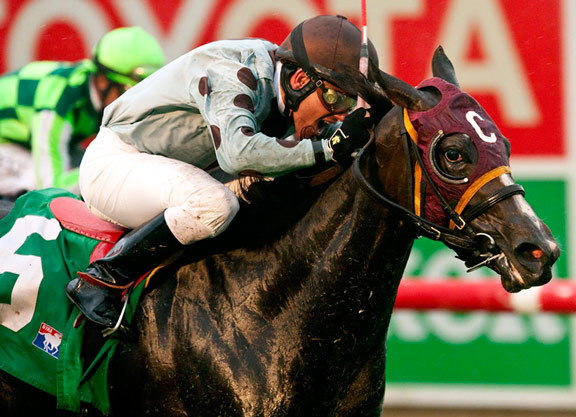 DP Racing's Prize Exhibit (GB) (Showcasing {GB}) came out on top in a blanket finish to the GII Monrovia S. at Santa Anita Sunday. The dark bay filly, sent off at 7-1, chased the pacesetters through a quarter in :21.33. She snuck through an opening along the rail after a half in :43.52 and surged to the lead. Defending Monrovia champ Shrinking Violet (Congaree) followed her path and began to challenge along the rail as favored Ageless (Successful Appeal) was unwinding a powerful late rally in the center of the course, but it was Prize Exhibit moving best of all in the final strides to get her nose on the line first.

“I didn't think she'd have any problem [coming down the hill for the first time] unless she started idling trying to figure out what the heck this is all about, which she has a tendency to do,” admitted winning trainer James Cassidy. “But being that [jockey Santiago Gonzalez] had her surrounded, she didn't have any time to think about that, so that was a good thing. I was a little upset we were that close, but when it opened for her, he rode her perfect, and she's a hard horse to ride. You could see down the lane she was out there in the clear and kind of looking around, so she can be difficult, but she got it done.”

Purchased privately after a close-up third-place effort in the G3 Oh So Sharp S., Prize Exhibit was transferred stateside to finish fourth behind Lady Eli (Divine Park) in the 2014