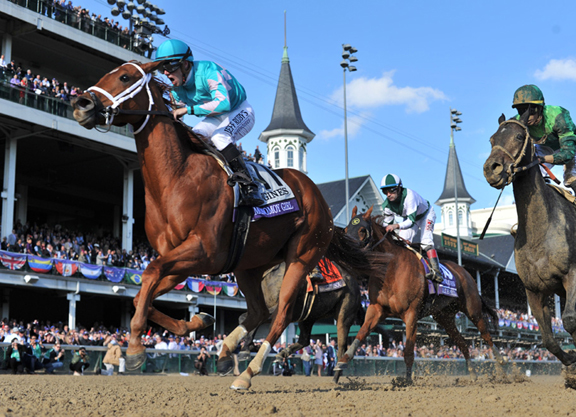 LOUISVILLE, Kentucky–What was billed as a match-up of the last two GI Kentucky Oaks winners turned out to be more or less a one-horse race as sophomore Monomoy Girl (Tapizar) stalked and pounced to a one-length victory in Saturday's GI Longines Breeders' Cup Distaff. Backed down late to 9-5 favoritism, the Brad Cox trainee broke well from her outside draw and grabbed second off the inside into the first bend as main market rival Abel Tasman (Quality Road) was hard ridden into the pocket. She settled into a nice rhythm behind splits of :23.39, :47.57 and 1:12.11, and took over willingly leaving the home bend as Abel Tasman failed to have any response to Mike Smith's imploring. Blue Prize (Arg) (Pure Prize) mounted a mild bid into the lane, but Monomoy Girl swatted it away before holding safe a fast finish by Wow Cat (Chi) (Lookin At Lucky) under a whipless drive. Midnight Bisou (Midnight Lute), who had sparred with Monomoy Girl all season, filled out the trifecta.

“It was a great trip,” said winning rider Florent Geroux, who had won four prior Breeders' Cups, including last year's Classic with Gun Runner (Candy Ride {Arg}). “She was super-sharp. I was able to lay second off Wonder Gadot (Medaglia d'Oro). I went to the lead past the three-furlong mark and from there she just kept on going all the way to the wire. This is a filly with great tactical speed and she loves to win. She's just unbelievable.”

Abel Tasman, last year's champion 3-year-old filly and a runner-up in the Distaff last season, turned in her second non-effort in a row. She was a puzzling fifth at 1-9 in the GI Zenyatta S. Sept. 30.

“She just quit,” Abel Tasman's trainer Bob Baffert said. “She just quit running. Sometimes they do that. I thought she was in a good spot, he was aggressive with her, but she just doesn't want to run anymore it looks like.”

Three for four last term, Monomoy Girl showed a different dimension to rally from well back and take the GII Rachel Alexandra S. at Fair Grounds Feb. 17. She was even more dominant in Keeneland's GI Central Bank Ashland S. Apr. 7, and bested Wonder Gadot and Midnight Bisou over track and trip in the May 4 GI Kentucky Oaks. The chestnut cut back successfully to a one-turn mile in Belmont's GI Acorn S. June 9, and defeated Midnight Bisou by three lengths in the GI Coaching Club American Oaks July 22. Freshened rather than attempt 10 panels in the GI Alabama S. or against the boys in the GI Travers S., Monomoy Girl crossed the wire a neck to the good of Midnight Bisou in Parx's GI Cotillion S. Sept. 22, only to be taken down for drifting out–something she has done throughout her career–and impeding Midnight Bisou.

Trainer Brad Cox, 38, has become one of the game's most successful trainers in the last several years. Monomoy Girl's Ashland victory was his first at the Grade I level. He won this June's GI Highlander S. with Long On Value (Value Plus), who is co-owned by Madaket Stables, a Sol Kumin entity like Monomoy Stables.

At the post-race press conference, co-owner Mike Dubb said: “You know, I don't think it struck me how good she was until the Coaching Club this summer and the way she just went around there. Then I realized maybe this is one for the ages, not just a champion but one for the ages.

“She's clearly demonstrated that, but all the credit goes to [bloodstock agent] Liz Crow, who picked her out; and Brad Cox, who just did a meticulous job. I have never seen a horse racing plan executed to the level of perfection, starting back in January. Every move he made was just perfect.”

Her owners indicated that Monomoy Girl would likely return to race next year, and said she could be considered for the lucrative GI Pegasus World Cup Invitational against open company in January.

“When you think about kind of going on a journey with a horse like this, the partners make a big part of it,” Kumin said. “You know, the four of us and our partners are partners on a lot of horses together–we've had a lot of good ones and a lot of not good ones, and when you get one like this, you really learn to enjoy it and enjoy spending the time together. Mike touched on some of it, but obviously this being the first ticket that Liz Crow really signed on a horse on her own when she went out and partnered with Brad [Weisbord], that's really special, and we're obviously excited about being part of that. Brad Weisbord, who's been a big part of all of our programs and has really been incredible for us and driven a lot of value for us over the last handful of years. To be so involved with them and have them be part of this horse, and then you look at Brad Cox, his first Grade I win, being a part of that with a trainer, is a spectacular thing. He's now won five of them with this filly, and it's been awesome to be a part of.”

Caruso added, “I tell people, you can't really open a $300 bottle of wine and drink it by yourself. It's just not a lot of fun. So unless you have partners, and I met Mike, and then from Mike I met Stu and Sol, and the truth is before I met Mike Dubb and these guys, the closest I ever came to a Grade I winner was I stepped in some manure outside of the barn, and that's the closest I ever got. But since I've been with these guys, they're just great, and they're just fun to win with, and they're fun to be with.”

Grant said, “What's been really nice is each of us in our professions have really taken great pride in giving young talented people opportunities, and now all of a sudden we've had the ability to do that in horse racing [with Cox, Weisbord and Crow].”

Monomoy Girl is the first Breeders' Cup winner for young sire Tapizar (Tapit), himself the winner of the 2012 GI Breeders' Cup Dirt Mile. She is the first filly to complete the Oaks/Distaff double since Untapable (Tapit) completed the feat in 2014. A $75,000 in utero purchase at KEENOV '14, Monomoy Girl is out of a half-sister to GSW Drum Major (Dynaformer). Her unraced 2-year-old full-brother Cowboy Diplomacy was a $175,000 FTKOCT yearling last season, while her Palace Malice now yearling half-brother was a $60,000 Keeneland November weanling. Dam Drumette produced a Shackleford colt Apr. 19 before being bred to Mastery.