Monomoy Girl Proves Better Than Ever in BC Distaff 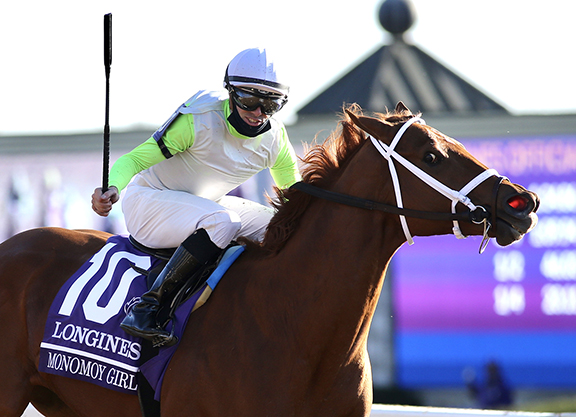 Monomoy Girl (Tapizar) completed a sensational championship season in 2018 with a victory in the GI Longines Breeders' Cup Distaff at Churchill Downs. After a series of medical issues forced her to miss her entire 4-year-old season in 2019, the Eclipse winner proved to be better than ever in her return to action this year, capping a perfect 2020 campaign with another victory in the Breeders' Cup Distaff at Keeneland Saturday.

Monomoy Girl was hammered down to even-money favoritism in an event billed as a match race between the top older mare and the leading sophomore filly, GI Preakness S. heroine Swiss Skydiver (Daredevil), who was dispatched as the 2-1 second-choice. While Monomoy Girl broke cleanly from the outside post in this 10-horse World Championship event, Swiss Skydiver stumbled a step exiting stall five. She quickly recovered, but appeared to be climbing as she raced on the fence in eighth early. Monomoy Girl, on the other hand, was perched three wide in fifth as Harvest Moon (Uncle Mo) and 45-1 shot Lady Kate (Bernardini) battled through a :23.11 opening quarter.

Monomoy Girl maintained her position out in the clear, keeping a close eye on the leaders as the half-mile went in :46.03 with Swiss Skydiver still biding her time near the back of the pack. As Harvest Moon registered three-quarters in 1:09.94, Monomoy Girl inched closer to the pacesetter with Valiance charging up boldly behind the chalk and Swiss Skydiver moving into contention up the fence. Monomoy Girl ranged up alongside Harvest Moon at the top of the stretch as Swiss Skydiver drew even with the leader on her inside and the stage appeared set for the match race everyone had hoped for. Monomoy Girl gained a narrow advantage and a determined Harvest Moon hung tough beside her for a few strides as Swiss Skydiver began to fade. The Eclipse winner charged clear halfway down the stretch as Valiance ranged up strongly and Dunbar Road (Quality Road) made a bold bid from well back. But neither of those rivals ever seriously threatened Monomoy Girl, who coasted home to a 1 3/4-length victory in the Distaff.

The winner is scheduled to go through the ring across town Sunday as Hip 192 at the Fasig-Tipton November Sale, appropriately dubbed the “Night of the Stars,” as is runner-up Valiance (Hip 231). Dunbar Road completed the trifecta and Harvest Moon was a game third. Swiss Skydiver faded in mid-stretch to finish a surprising seventh.

When asked if Monomoy Girl will sell as planned, co-owner Sol Kumin said, “I think we are going to enjoy tonight. I think this group of owners will jump on a phone call later tonight or tomorrow and try to come up with a game plan. We will just kind of figure it out. I think at the end of the day we're trying to be smart in the way we run our stable and she's had an unbelievable career. We have to sort of think about what's best for her and we'll have to put out heads together and figure it out.”

“Honestly it's a relief,” said Cox. “She means the world to me and it's a lot of pressure when we run her, I don't know why. It just is. It's been a long road back. She's a real race horse. She's meant so much for so many people's lives, she's an amazing creature. I love her to pieces. Words can't even describe it. I think she plays a big role in our other three Breeders Cup victories over the weekend. She's meant so much to so many people's lives. She was my first Grade I winner here at Keeneland. I'm just do proud of her.”

“What a mare, just exceptional,” said winning rider Florent Geroux, who has been aboard Monomoy Girl for all of her starts. “She's a mare of a lifetime, very rare. It's like finding a diamond. When you have it, you do the best you can. It's a gift. Even after all she's been through, being off a year and a half, to come back and still be at the top of her game is unreal. I'm super thankful for the opportunity that Brad and the owners have given me.”

Todd Pletcher said he was pleased with his charge's runner-up effort.

“I thought she ran super,” Pletcher said. “We had a good trip, a little wide on both turns, but we were following the winner. She put in a good run. Kept them honest to the wire.”

As for the beaten favorite, Swiss Skydiver, rider Robby Albarado said, “She stumbled a little bit leaving there. It maybe cost her a little length or two position-wise, but it didn't cost us the win. I had a great opportunity turning for home and get on through there and get heads-up with the champ, but she just didn't have it today. I'm disappointed that we didn't win, but I'm not disappointed in her. What she has done in her career, she has never let anybody down, she hasn't disappointed anybody. The way she ran in the Preakness, she doesn't have to validate herself from here on out. She's a special filly and everybody knows her. She gets a little time now and will come back next year stronger.”

Monomoy Girl crossed the line first in all seven of her starts in 2018, but was disqualified from one, the GI Cotillion S., and placed second behind Fasig-Tipton bound fellow champion Midnight Bisou (Midnight Lute). In addition to the Distaff, her 2018 championship season was highlighted by victories in the GI Ashland S., GI Kentucky Oaks and GI CCA Oaks.

Given a brief freshening after her Eclipse-winning campaign, the chestnut returned to the Brad Cox barn in the winter of 2019, but was soon sidelined by a case of colic. After rehabbing at WinStar, she rejoined Cox in July of 2019, but was sent to the bench yet again with a hamstring injury, which kept her off the track for the rest of her 4-year-old year.

Monomoy Girl is the only Grade I winner by Tapizar, as well as one of six graded winners and 11 black-type scorers by the Gainesway stallion. She is also the only Grade I winner, one of three graded victors and one of 14 black-type winners out of a daughter of Henny Hughes. The winner's dam Drumette–a half-sister to GSW Drum Major (Dynaformer)–summoned $1.85 million from Bridlewood at the 2018 Fasig-Tipton November Sale while carrying a foal by Mastery. The resulting foal was a filly and she had a colt by Tapit May 25 of this year. Monomoy Girl's 3-year-old half-brother, 'TDN Rising Star' Mr. Monomoy (Palace Malice), won one of the divisions of this year's GII Risen Star S. at Fair Grounds, but was knocked off the GI Kentucky Derby trail with a minor injury. Her 2-year-old half-brother Superman Shaq (Shackleford) sold to Justin Casse at last month's OBS Spring Sale for $550,000. He also earned the 'TDN Rising Star' nod after an impressive second-out graduation at Del Mar Sept. 6.