Monmouth To Offer Fixed-Odds Betting in 2020 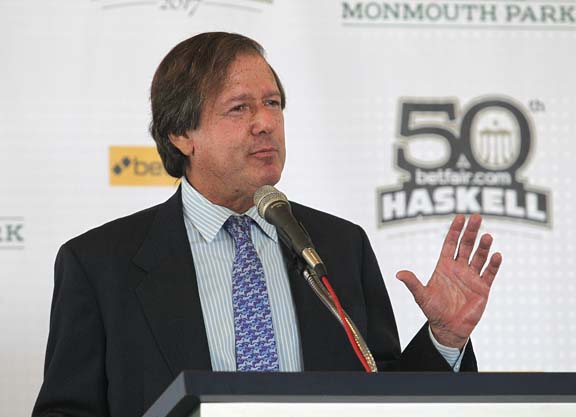 Darby Development LLC., the operator of Monmouth Park, has entered into a 10-year agreement with the Australian firm BetMakers in which BetMakers will manage and distribute fixed-odds betting on Monmouth's races, starting at this year's meet.

BetMakers CEO Todd Buckingham predicted that fixed-odds wagering will have a major impact on the future of U.S. racing.

“We believe that U.S. horse racing has the potential to be the be the largest betting sport in the U.S., including basketball, American football and baseball,” he said in a press release.

With pari-mutuel handle in the U.S. in sharp decline since 2003, the idea of fixed-odds wagering has gained more traction as the racing industry looks to find ways to turn its fortunes around. Monmouth, where the management has never been afraid to take bold steps, will provide a litmus test for a form of betting that is popular in Great Britain and Australia, but has yet to be tried on anything close to a large scale in the U.S.

“I am sure there will be people saying we are taking a shot in the dark by doing this because no one knows the math yet,” said Darby Development CEO Dennis Drazin. “But somebody had to be first. You can't just sit still and do nothing.”

Drazin said fixed-odds betting should prove to be attractive with bettors who are not happy about drastic odds changes in the pari-mutuel pools after the a race has started.

“When I speak to our consumers, bettors tell me they are tired of having a horse go into starting gate at one price and, a furlong into the race, the price is half what it was when they left the gate,” he said. “People will get a fairer shake this way.”

He also believes fixed odds will be more attractive to younger customers and to seasoned players who like to shop for value. But, he admitted that it may take time for the concept to catch on.

“In the early part, this will probably be smaller than what you will see five or 10 years from now,” he said. “It might be like what we have seen with exchange wagering, that there will be a learning curve before people switch over. Probably a lot of people will just still use the pari-mutuel system. But this should appeal to a younger demographic. They will be more interested in this and so will bettors who really understand the value of their wagers and feel they can get a better shake with fixed-odds betting.”

“There is a real opportunity for the U.S. horse racing market to grow like it has in Australia, which has seen prize money levels double over the past seven to 10 years based on a funding model that is equitable to all participants,” Buckingham said.

Drazin said he did not know what the effective takeout would be on fixed-odds betting and that that would be left up to BetMakers.

After making the announcement that it had entered into an agreement with Monmouth, BetMaker's stock rose by 54%.