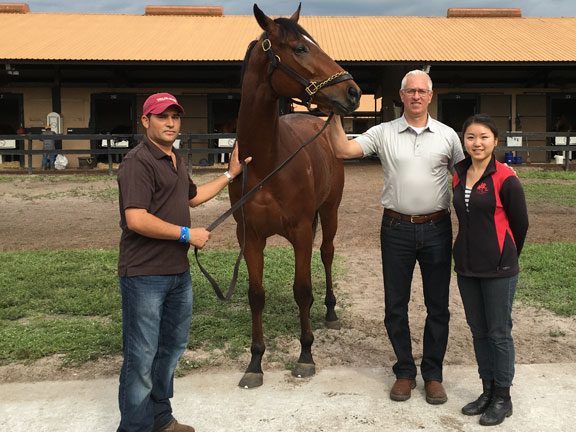 Inner Mongolia Rider Horse Industry's Mongolian Prince (NZ) (St Reims {NZ}) became the fourth horse to race in mainland China to be domiciled in the United States when he joined the barn of trainer Todd Pletcher in South Florida Jan. 5.

A Southern Hemisphere 3-year-old–he is categorized as a 4-year-old in the Northern Hemisphere–Mongolian Prince won three of his five races after his export to China at three, including a 21-length victory at Wuhan last October.

In years past, horses imported into China were restricted from ever leaving the country due to quarantine restrictions, but this has since changed. The China Horse Club maintains a three-horse stable under the care of trainer Leonard Duncan in California.

Mongolian Prince is owned by Inner Mongolia Rider Horse Industry Co. Ltd., whose CEO Lin Lang acquired the colt in 2013. The company's most prominent runner is Mongolian Khan (Aus) (High Chaparral {Ire}), the 2015 Horse of the Year in New Zealand and winner of the G1 New Zealand and G1 Australian Derbies.