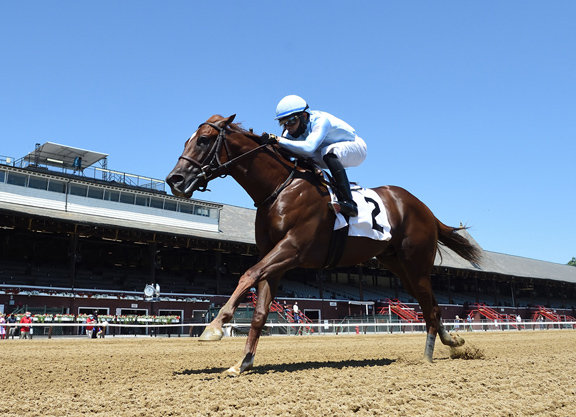 In Greek mythology, Momos is “the personification of satire and mockery.”

In horse racing, Momos is a very talented and very fast son of Distorted Humor and Inspeight of Us (Speightstown) who delivered the first 'wow' performance in the first 2-year-old maiden of the Saratoga meet July 18 (video), earning 'TDN Rising Star' status.

“I think everybody that buys a horse that wants to win that first maiden special at Saratoga realizes that you're going to be running against some of the best horses that have been specifically targeted for those races,” said Harlan Malter, the managing partner of Ironhorse Racing Stable, which owns Momos in partnership with Tami Bobo's Secure Investments.

“No matter how good your horse is training, it's difficult to expect to win,” he continued. “The reports I got were that the horse is healthy and training great and, something you always like to hear–'This is a fast horse.' We were concerned about a possible speed duel or running into a monster, but I was cautiously optimistic. We felt like he was going to run well, but I don't think anyone goes into those races thinking that you're going to win. But we were thrilled with the way he did it.”

Turns out Momos was the monster.

Momos was bred by Bobo and the Distorted Humor syndicate and was purchased for $75,000 as a short yearling at the 2019 OBS Winter Mixed Sale. Entered for, but withdrawn from the Fasig-Tipton July sale, the colt was rerouted for the breeze-up sales, where De Meric Sales was tasked with the prep work ahead of this year's OBS March sale.

Malter has a soft spot for OBS, owing in no small part to the fact that it was at the auction house's June sale in 2014 that he and his partners acquired a chestnut colt by Kantharos for $43,000. An Indiana-bred, Bucchero took the Ironhorse partnership on the ride of a lifetime, winning back-to-back renewals of the GII Woodford S. at Keeneland leading to consecutive appearances in the GI Breeders' Cup Turf Sprint. The over-achieving near-millionaire also represented Ironhorse at Royal Ascot in 2018, finishing a highly creditable fifth in the G1 King's Stand S.

While in England, Malter–an enormous fan of Cigar–made the acquaintance of Riley Mott, the son of Cigar's Hall of Fame trainer Bill Mott, who was to be represented on the same opening-day program by Yoshida (Jpn) (Heart's Cry {Jpn}) in the G1 Queen Anne S. The junior Mott recommended to Malter that he consider bloodstock agent Phil Hager if he was looking for advice on any future purchases. In July 2018, Hager, a one-time employee of the Mott barn, left a position in bloodstock services at Crestwood Farm to launch Taproot Bloodstock. A partnership was struck.

Ultimately, there was a fair bit of synergy between Malter–'the pedigree guy'–and Hager, who concentrates more on the physical in front of him without regard to the page, where it came to the Distorted Humor colt, who hammered for $180,000, with Taproot signing as agent for IHR.

“What we'll generally do is not put any horses in his mind,” Malter said of the team's approach. “He'll do his list and then we'll see if there's overlap and go from there. What was great about this one, which rarely happens, this was basically on the top of our list going into the sale. The horse obviously worked very, very well (:21 flat) and Phil was very happy with the work, specifically–the way he did it, how professional and forward the horse was. Once we had that overlap, it was basically the target of our whole sale. Phil does a tremendous job. Tami Bobo expressed an interest to stay in for part, and it's been a pleasure to have her as part of the team.”

He added, “When you have a horse that you kind of model everything after–with Bucchero being in my mind's eye–I like to see very efficient movers and when we saw him in the work, he just did everything the right way. He kind of just drove himself into the ground, low, a very driving and efficient mover. There was no wasted energy. He galloped out extremely well. We were also really happy that he was coming out of the de Meric consignment. We have a relationship with Tristan and Valery de Meric, we know how well they prep them and we knew he'd probably come out ready to go.”

Malter admitted that the colt was at the upper limits of what they wanted to spend, but that circumstances dictated that they be aggressive.

“We felt with what was going on in the world that (a) potentially this was going to be the last time to buy for a little bit; and (b) there also may be a little reluctance to spend as much money at that sale. We did see it as a potential value play, so we were ready to spend a little bit of money. As far as Ironhorse, we try to offer a wide range, from $30,000 up to $200,000, which is about as much as we want to spend. We're really looking for value. We were looking to try to get a $300,000 horse for $150,000, and we weren't too far off that. We are going to have to do a little bit of zigging when other people are zagging and this is a little bit of where I blend my other business, being a financial planner, with looking at horses.”

Ironhorse campaigns its horses with Tim Glyshaw–who called the shots on Bucchero's career–Mike Trombetta and Mott, but Malter was keen on getting a horse to Christophe Clement.

“I met [Clement's son] Miguel at last year's OBS sale and that got the wheels in motion. I've really enjoyed working with Christophe and Miguel, they make a very strong team,” Malter explained. “When we gave the horse to Christophe, we said, 'Maybe this is the horse that gets us back to the Breeders' Cup Turf Sprint down the road,' but the feedback we got was, 'This horse can really run on dirt, let's not worry about grass now.' Initially the goal on this horse was turf sprinting and I don't think there are a lot of trainers better at training turf sprinters than Christophe. But, obviously he showed what he could do right now on the dirt.”

With that in mind, Momos is a candidate for the six-furlong GII Saratoga Special S. Aug. 7 and/or the GI Runhappy Hopeful S. over seven furlongs Sept. 7.

As for Bucchero, he has completed his second year covering mares at Pleasant Acres Stallions in Florida. As hands-on as he was during his racing career, Malter has taken an active role in aggressively marketing his stallion to the breeding public.

“I grew up with the Todd Marinovich story, where his father was so heavily involved with managing his whole development and career,” Malter said, referring to the former professional football quarterback. “I often feel like if Bucchero could talk, he'd say, 'Who is this guy and why is he always around?' I've tried to take the bull by the horns and do the best that I could by this horse. But he's done all the speaking. It's been unusual that we've had an even bigger second year than we had the first year.”

“There's really only one thing I was hoping for with the babies–that [Bucchero's] mind would come through,” he said. “The feedback I am getting from the breeders on a consistent basis is 'solid, balanced, athletic,' but they almost always emphasize these horses' minds. When I hear people describing these foals, it's like they're describing Bucchero to me.”