Momentum Continues to Build Ahead of Inaugural Saudi Cup 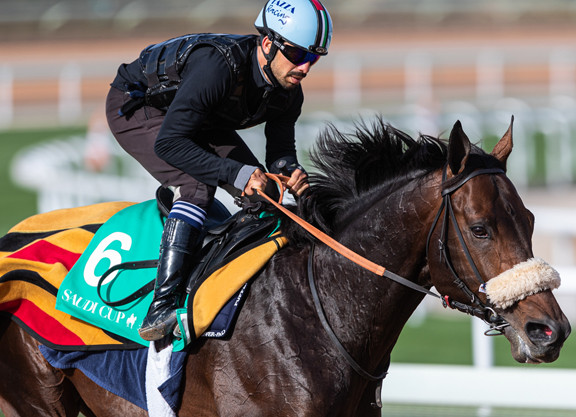 RIYADH, SAUDI ARABIA – The anticipation continued to build ahead of the $29-million Saudi Cup card, with a large crowd of locals and visitors on hand Thursday to watch contenders gallop over the mammoth King Abdulaziz Racetrack in Riyadh two days before the country’s biggest-ever day of horse racing.

Among the Americans on hand trackside on a chilly morning which quickly turned warmer as the sun rose was West Point Thoroughbreds’ Terry Finley and bloodstock agent Bruno DeBerdt.

“I’ve been to Dubai a couple of times, but I was really excited by the opportunity to come here,” Finley said. “I’m all for the Thoroughbred business and trying to make things better and I think when we can do something like this and everyone can learn and all of us can meet each other from around the world, I don’t think that can be anything but a win.”

While West Point colors won’t be seen during this Saturday’s card, Finley is hoping the partnership will be represented in Riyadh in the future.

“We don’t have anything running, but I thought on the business side it would be good to come and just get a lay of the land,” Finley explained. “They certainly plan on the Saudi Cup being in a prominent spot at the beginning of the year, so I would hope in the years to come that we have a runner. I would hope that it would happen in 2021.”

Both Finley and DeBerdt toted catalogues for the upcoming Fasig-Tipton Gulfstream Sale courtesy of the company’s Reed Ringler, with DeBerdt opening the book to point out a trio of juveniles he will consign to the Apr. 1 auction through David Scanlon and Finley saying with a laugh, “The first person I ran into at the breakfast today was Reed Ringler and I picked up a Fasig-Tipton catalogue–I know [Fasig-Tipton President] Boyd Browning will be really happy to read that.”

“We arrived Tuesday night and everyone has been really welcoming,” Rachel DeBerdt said. “It’s been great. It’s been very different to anywhere I’ve ever been. Bruno has been here many times, so I wasn’t coming completely blind, but I’ve felt very welcomed here.”

Among the local trainers out welcoming visitors to their home track was  Abdulaziz Khalid, who will send out a trio of horses on  Saturday’s historic card.

“It’s very exciting to see all the horses from around the world here,” Khalid, son of owner Mishref Khalid and a third-generation horseman, said.

“They will be very challenging races,” Khalid admitted. “I think Imperial Hint (Imperialism) will be very tough in the Sprint and the Frankel (GB) [Mekong {GB}] coming from Dubai is a very good horse.”

Bob Baffert will saddle two of the major contenders in the $20-million Saudi Cup in Mucho Gusto and ‘TDN Rising Star‘ McKinzie (Street Sense), but the trainer admitted it will be a tough race.

“They all have to bring their ‘A’ game,” Baffert said. “They are two top individuals, but then you have Maximum Security (New Year’s Day). I hated it when I heard he was coming over here because he’s so good, he’s so fast. And you’ve got the filly [Midnight Bisou (Midnight Lute)], she looks good. I always root for Midnight Lutes because I trained Midnight Lute. Sheikh Mohammed sent his good horse [Benbatl (GB) (Dubawi {Ire})] over here. I think it’s going to be a great race.”

Midnight Bisou had been catalogued to sell at last year’s Fasig-Tipton November sale, but co-owner Jeff Bloom admitted the inaugural Saudi Cup was a major reason to withdraw the champion filly from that auction.

“We were supposed to be selling Midnight Bisou at the November sale,” Bloom said. “We decided the day before the Breeders’ Cup that we were going to go ahead and race her another year. And one of the things that went into the equation in making that decision was that there was a $20-million race on the horizon.”

Bloom has been impressed with how Midnight Bisou has travelled to Saudi Arabia.

“The filly adapts to pretty much anything you throw at her,” he said. “So traveling over here really took nothing out of her. And she has trained exceptionally well since she got here.”

Of his chances Saturday, Bloom said, “I’m probably not going to sleep for the next couple of days. They are all going to have to have their running shoes on. This is quite a cast that has been assembled. This is a world-class horse race. And you can make a case for every one of these horses if they have their best day. We think we have a horse who could win the race.”

The Saudi Cup will be televised in the U.S. live on FOX Sports 1 at Noon ET (DIRECTV ch. 219, Dish ch.150) with the undercard airing on TVG. In the UK, it will be shown on Sky Sports Racing and Racing TV.