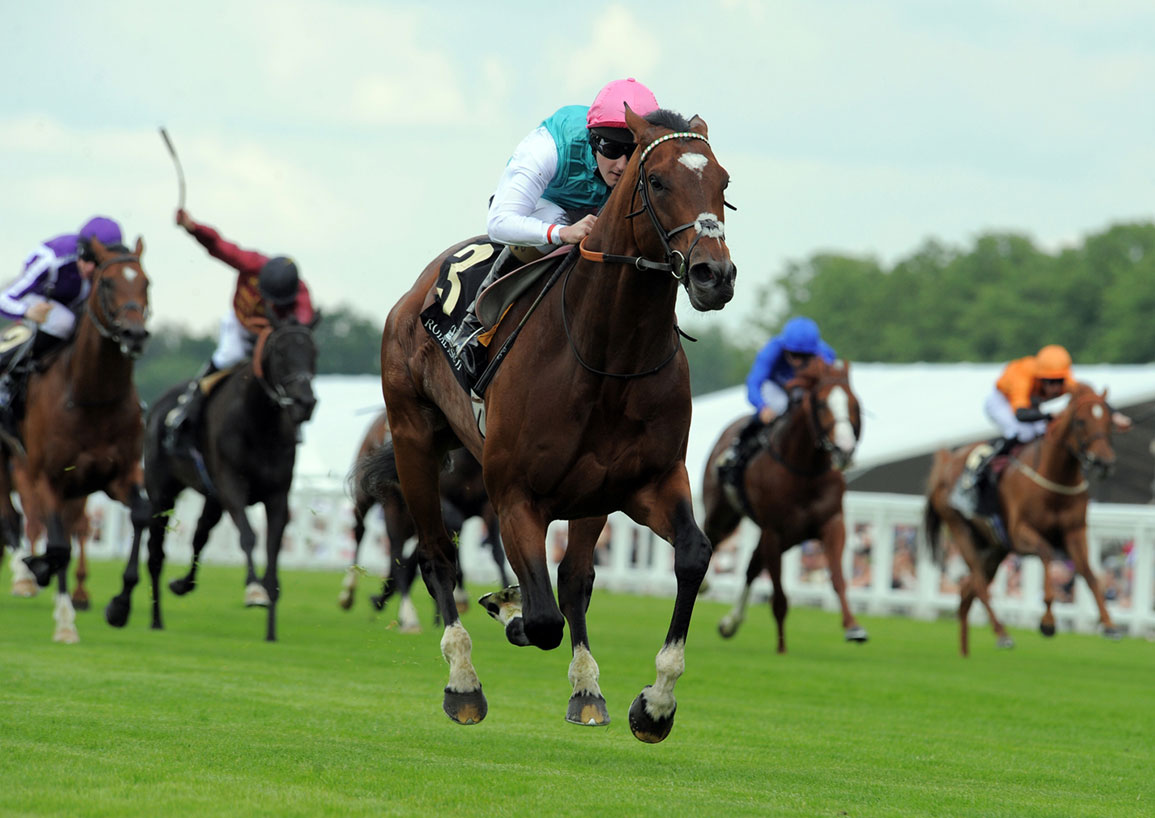 Since the turn of the millennium, European racing has supplied several “wow” moments and every individual has their favourite. After some agonising I have selected, in my opinion, what I see as the top 10. There have been some big ones left out, so apologies to begin with. Frankel (GB) is in there four times, for which I make no apology, as it could have been seven or eight. Here are my elite in chronological order:

Dubai Millennium, 2000 G1 Prince of Wales’s S.
Following his astonishing Dubai World Cup exhibition under the lights at Nad Al Sheba, Sheikh Mohammed’s pride and joy went to the Royal meeting to face The Aga Khan’s excellent Sendawar (Ire) (Priolo). The latter was a serious horse at the time and was attempting a fifth straight Group 1 win. Such was his status, the French raider was even narrowly favoured over his nemesis in the betting but at halfway was already beginning to feel the pinch. Jerry Bailey, deputising for the injured Frankie Dettori, let Godolphin’s beautiful bay roll in front and by the turn for home Gerald Mosse was throwing everything at Sendawar. Dubai Millennium had already cracked him at that stage and was remorseless to the line, winning by eight from the German challenger Sumitas (Ger) (Ger) (Lomitas {GB}). This was one of those races which bare ratings cannot measure and it is just as remarkable to witness 20 years on.

Montjeu, 2000 G1 King George VI and Queen Elizabeth Diamond S.
It is hard to convey to those who did not serve as witness just how important Montjeu and Dubai Millennium were in this golden year for racing and there haven’t been two such brilliant performers around at the same time since. Sadly, the match we all wanted to see never materialised and no expert can claim to know who would have come out on top. Montjeu already had the “look of eagles” prior to this tour de force in Ascot’s summer showcase, which ensured his legacy. Described as doing just “three-quarter speed” by Mick Kinane afterwards, Michael Tabor’s illustrious 4-year-old played with Fantastic Light (Rahy) and Daliapour (Ire) (Sadler’s Wells) in a display rarely seen. Not since Nijinsky II breezed past Blakeney (GB) in the 1970 edition had a horse won this prestige event while still on the bridle and that had come under favourable weight-for-age terms. There was one 3-year-old in this race, the G1 Satsuki Sho winner Air Shakur (Jpn) (Sunday Silence), and he was just another left trailing by John Hammond’s megastar.

Sakhee, 2001 G1 Prix de l’Arc de Triomphe
It would have been just as valid to put this amazing runner’s G1 Juddmonte International performance in the list, such was the brilliance of that seven-length success at York which preceded this examination at Longchamp. He had to deal with testing ground in France, as well as a clutch of classy 3-year-olds, so the fact that he made such light of the task in hand meant that his Arc victory holds sway. To these eyes, he put up what is still the best effort in the famed race this millennium. The G1 Prix de Diane and G1 Prix Vermeille winner Aquarelliste (Fr) (Danehill) was in receipt of 11 pounds weight-for-age, but could get no closer than six lengths at the line. A magnificent horse who went on to be beaten a nose by Tiznow in the Breeders’ Cup Classic, this was Sakhee in his peerless pomp.

Hawk Wing, 2003 Lockinge S.
This was another rare destruction job in a prestige affair and an extraordinary performance from the horse who remains the highest-rated of all of Aidan O’Brien’s armada of stars. Drawing the energy from Where Or When (Ire) (Danehill Dancer {Ire}) with every crushing furlong, he exacted true vengeance for his surprise defeat at the hands of that rival in the previous season’s G1 Queen Elizabeth II S. Jimmy Lindley said that when they took the sheet off Hawk Wing at Newbury he had never seen a specimen like him and it was that physicality which came through on this 4-year-old debut. Where Or When was 11 lengths back in second, while the previous year’s GI Breeders’ Cup Mile hero Domedriver (Ire) (Indian Ridge {Ire}) was beaten a total of 20 lengths in a ruthless time-trial effort. The runner-up’s rider Kevin Darley opined that the winner would win a Nunthorpe and after this freakish showing, few would argue.

Harbinger, 2010 G1 King George VI and Queen Elizabeth Diamond S.
Harbinger had smart form entering this renewal, but nothing that suggested he would inflict an 11-length defeat on a G1 Irish Derby winner in Cape Blanco (Ire) (Galileo {Ire}) and an even greater one on the likes of Youmzain (Ire) (Sinndar {Ire}) and his G1 Epsom Derby-winning stablemate Workforce (GB) (King’s Best). How he did so remains a riddle, wrapped in a mystery, inside an enigma, but the evidence is there on film for the disbelievers. On this showing, he was one horse since the start of the millennium that could really have put it up to Frankel (GB) had their stars crossed.

Frankel, 2010 G2 Royal Lodge S.
By the time Khalid Abdullah’s great prospect reached his third start in this juvenile contest, he was already the sport’s worst-kept secret such was his elevated home reputation and pyrotechnics at Doncaster. What he did in this slowly-run affair was spellbinding. Held up at the back initially, he carted Tom Queally around the field in a stunning mid-race move in an event that was little more than a four-furlong sprint. Covering the last three furlongs in :35.5 seconds, he hit the line with 10 lengths and upwards to spare over three subsequent group and graded-stakes scorers including the following year’s G1 Irish Derby hero Treasure Beach (GB) (Galileo {Ire}). “Oh my word, we have seen a champion there,” Clare Balding stated on BBC in the immediate aftermath. It may not have been rated as high as some others in terms of 2-year-old performances in this era, but such strict measurements are in this instance misleading. As a show of power in a steadily-run race, it is off the scale.

Frankel, 2011 G1 2000 Guineas
If the previous year’s G2 Royal Lodge S. had shown what Frankel was capable of when presented with a tactical, falsely-run race, this iconic performance put him in exalted territory. Drawn on the other extreme to his potential pacemaker Rerouted (Stormy Atlantic), the Warren Place colossus just cut loose as Tom Queally took history into his own hands. We all expected something special, but he suddenly went all Tudor Minstrel (GB) on us. It was the first time anybody had heard widespread applause during a European Classic race and it is a moment which will outlast all of those either present or watching on TV.

Frankel, 2012 G1 Queen Anne S.
If he had supplied us with one of the great racing spectacles in the previous year’s G1 2000 Guineas, Frankel’s heavy defeat of Excelebration (Ire) (Exceed and Excel {Aus}) et al had the sport’s big thinkers reaching for new ways to explain the phenomenon. That a horse could ever be sent off at 1-10 in a Royal Ascot race seems ludicrous, but Frankel was a throwback to the pre world-war legends with no modern comparison. He was some sight in full flow over Ascot’s straight mile this day and registered the third 11-length verdict in this list. It was the one that made Timeform re-write the history books.

Frankel, 2012 G1 Juddmonte International
Played out on a sun-drenched Knavesmire, this was Frankel ultimate exhibition and the shining hour in Sir Henry Cecil’s guiding of the great talent. On a form basis, everything he had done before was marginally eclipsed here. The second and third Farhh (GB) (Pivotal {GB}) and St Nicholas Abbey (Ire) (Montjeu {Ire}), were two of their stable’s best horses of the last 20 years and they were made to look pedestrian as Frankel blew by and on to a seven-length triumph. He missed the start too! This was a true moment of wonder and nobody will ever forget his legendary trainer’s mix of physical frailty and spiritual wellbeing in the aftermath.

Pinatubo, 2019 G1 Goffs Vincent O’Brien National S.
Rated the best juvenile in this era on this evidence, Charlie Appleby’s unbeaten dynamo brushed aside his Irish rivals with a shocking show of superiority. Undeterred by slightly easy ground conditions, the son of Shamardal who was also a high-class 2-year-old swamped the smart Ballydoyle colts Armory (Ire) (Galileo {Ire}) and Arizona (Ire) (No Nay Never) to win by nine lengths. If there is no Guineas in 2020, people will talk for many years about the brilliant colt who was cruelly robbed of his crowning Classic moment.

Agree or disagree? Email Gary King ([email protected]) to have your say.