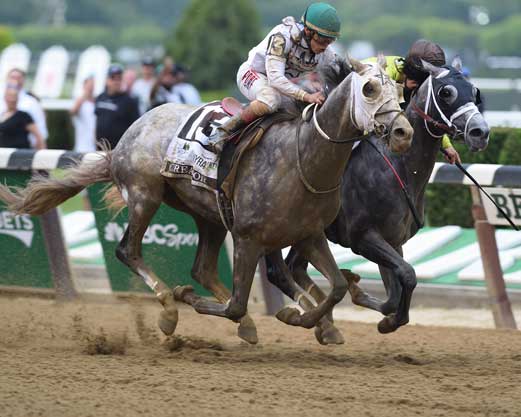 The first two finishers in the June 11 GI Belmont S., separated by a nose that day, will re-engage in this nine-furlong test with Creator (Tapit) and Destin (Giant’s Causeway).

Late-running Creator may be up against it from a pace perspective, as there doesn’t appear to be much speed signed on. Destin, a heartbreaking loser of the Belmont after taking a clear lead into deep stretch, should work out a good trip stalking the speed of longshot maiden Laoban (Uncle Mo).

Resuming his 3-year-old campaign as the morning line favorite is Mohaymen (Tapit). A winner of the first five starts in his career, the Shadwell Stable colorbearer finishing fourth twice to Haskell favorite Nyquist (Uncle Mo) in the Apr. 2 GI Florida Derby and May 7 GI Kentucky Derby. The gray’s trainer, Kiaran McLaughlin, is off to a sizzling start at this meet, picking up seven winners in the first six cards.

Governor Malibu (Malibu Moon), fourth in the Belmont, could be ready for a breakout performance. Second in the GII Peter Pan S. May 14, the chestnut had a world of traffic trouble entering and during the stretch of the Belmont, but still churned on well to complete the superfecta.

Race Me Home (Ire) (Oasis Dream {GB}) is an interesting longshot on the ascent for trainer Dale Romans. Breaking his maiden by a head in the last race on Kentucky Derby day, the son of MGISW Society Selection (Coronados Quest) made a promising stakes debut when running second at 14-1 in the Easy Goer S. on the Belmont undercard. His 99 Beyer for that effort is tied for second-best in the field, only behind the 100 Destin earned for his GII Tampa Bay Derby victory.