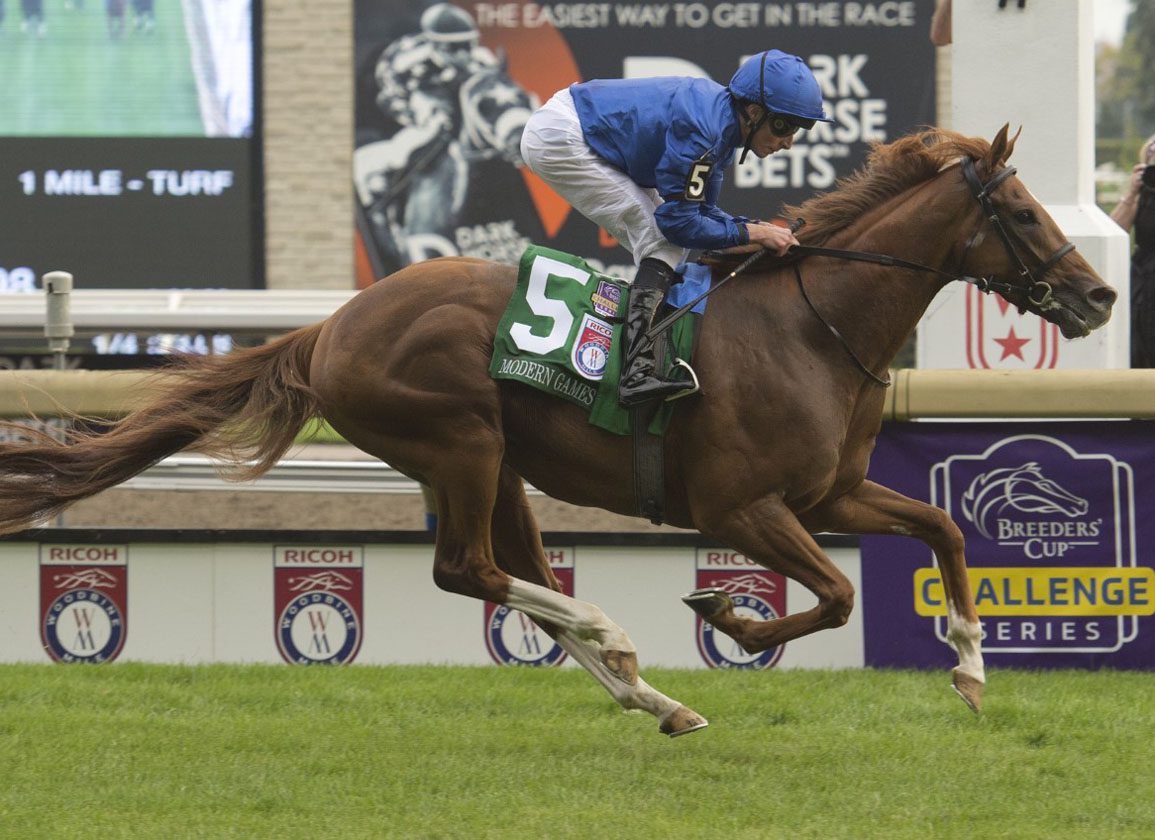 When last seen on these shores, Godolphin's Modern Games (Ire) (c, 3, Dubawi {Ire}–Modern Ideals {GB}, by New Approach {Ire}) was embroiled in the controversy of all controversies, when erroneously scratched, then allowed to run–albeit for purse money only–in the GI Breeders' Cup Juvenile Turf, which he duly won. The homebred is likely back on his way to the Breeders' Cup after pummeling overmatched rivals by five lengths in Saturday's GI Ricoh Woodbine Mile, for which Modern Games earns an all-expenses-paid trip to Keeneland.

Allowed to drift back to sit worse than midfield as Get Smokin (Got Stormy) set a strong tempo in advance of War Bomber (Ire) (War Front), the chestnut still found himself in the latter half of the field, in some traffic and very much on hold as they raced into the final three-eighths of a mile. Waiting for the precise moment to pull the trigger, William Buick set Modern Games alight once heads were turned for home, beating GI Maker's Mark Mile winner and 'TDN Rising Star' Shirl's Speight (Speightstown) to a spot while angling out and around  fellow European raider Finest Sound (Ire) (Exceed and Excel {Aus}). Once into the clear, Modern Games let down beautifully and motored through the final couple of furlongs to score decisively. Ivar (Brz) (Agnes Gold {Jpn}) was along late to take a photo for second over Finest Sound. Modern Games is the first 3-year-old to win the Woodbine Mile.

Winner of this year's G1 Poule d'Essai des Poulains (French 2000 Guineas) in his first post-Breeders' Cup appearance in May, Modern Games failed to see out the extended 10-furlong trip when beaten 5 1/4 lengths into third by the exciting Vadeni (Fr) (Churchill {Ire}) in the G1 Prix du Jockey Club June 5. Fractionally disappointing when fifth as the 8-5 favorite in the G1 Prix Jean Prat at Deauville July 10, Modern Games ran Europe's top horse Baaeed (GB) (Sea The Stars {Ire}) to 1 3/4 lengths when last seen in the G1 Sussex S. at Goodwood July 27.

Modern Games is one of four winners from five to the races for his dam, also responsible for this year's Listed Royal Windsor S. winner Modern News (GB) (Shamardal) and Mawj (Ire) (Exceed and Excel {Aus}), second in the G3 Albany S. at Royal Ascot before taking out the G2 Duchess of Cambridge S. during Newmarket's July meeting. Modern Games was produced by a half-sister to G1SW Ultra (Ire) (Manduro {Ger}) and Synopsis (Ire) (In The Wings {GB}) and his deeper female family also includes Bosra Sham and Hector Protector. Modern Ideals is the dam of a yearling filly by Mastercraftsman (Ire).