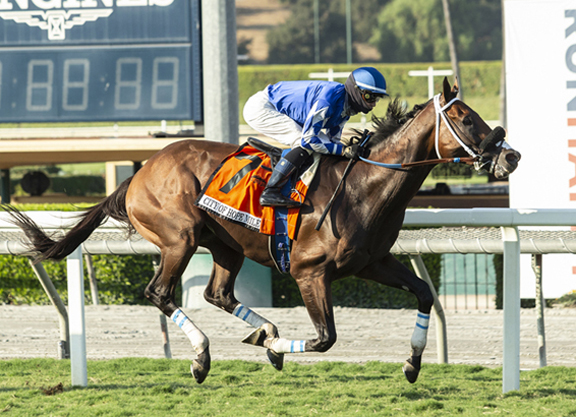 The heavy chalk with an eye on the GI Breeders' Cup Mile in five weeks, Mo Forza more than delivered in the GII City of Hope Mile S. As per his usual style, he wasn't swift out of the gate, but settled confidently on the outside in fifth and had an air of controlled power as he let the race unfold. Blitzkrieg (War Front) was hustled to the lead as Bob and Jackie hounded him and Sharp Samurai threatened in third. The order remained the same as the first quarter passed in :22.58 and the half in :45.61, but the complexion of the race was clearly changing as six panels were recorded in 1:08.76. Mo Forza, under supremely confident handling, reeled in the four in front of him and slingshotted by under a hand ride. The 1 3/4-length margin belied the effortlessness of his win. The final time was just a couple of ticks off the course record.

“He pretty much had the same trip as he did in the Del Mar Mile ,” said winning rider Flavien Prat. “I think he's getting more professional, which is great. Today he showed up again. We can probably go further, but as of right now, he's running pretty well, so I wouldn't change anything.”

Mo Forza was no overnight success, requiring six starts to break his maiden in 2019, which he finally did last September at a mile over this course and distance. Once he got the hang of winning, he was unstoppable for four straight starts, leapfrogging his conditions straight from the maiden to consecutive wins in the GII Qatar Twilight Derby, the GI Hollywood Derby, and the GII Mathis Brother Mile S. He rode that streak into the GI Pegasus World Cup Turf Invitational S., his first start outside of California, but had a wide trip and finished a well-beaten ninth. Freshened for seven months, he reappeared with a vengeance in the Aug. 23 GII Del Mar Mile H., where he won for fun by 4 1/4 lengths and got a 101 Beyer Speed Figure, the best of his career.

Uncle Mo, currently the third-leading sire in North America by earnings, continues his stellar year with yet another graded score to his credit. The Coolmore sire has 19 individual black-type winners of 2020–second-best on the continent–to go with his 67 total stakes winners in six crops to race. Mo Forza is one of Uncle Mo's 38 graded winners, but the first of his stakes winners out of an Unusual Heat daughter. Unusual Heat, who died at age 27 in 2017, stood his entire career in California and averaged only 44 foals a year. His daughters have produced 19 black-type winners to date. The unplaced Inflamed, a full-sister to GII La Jolla H. winner Burns and to SW & GISP Brushburn, produced Mo Forza as her first foal. She has a yearling colt by Munnings and produced a filly this year by Tapiture after selling with that one in utero for $525,000 at the Keeneland January sale. She has since been bred back to Uncle Mo for 2021.