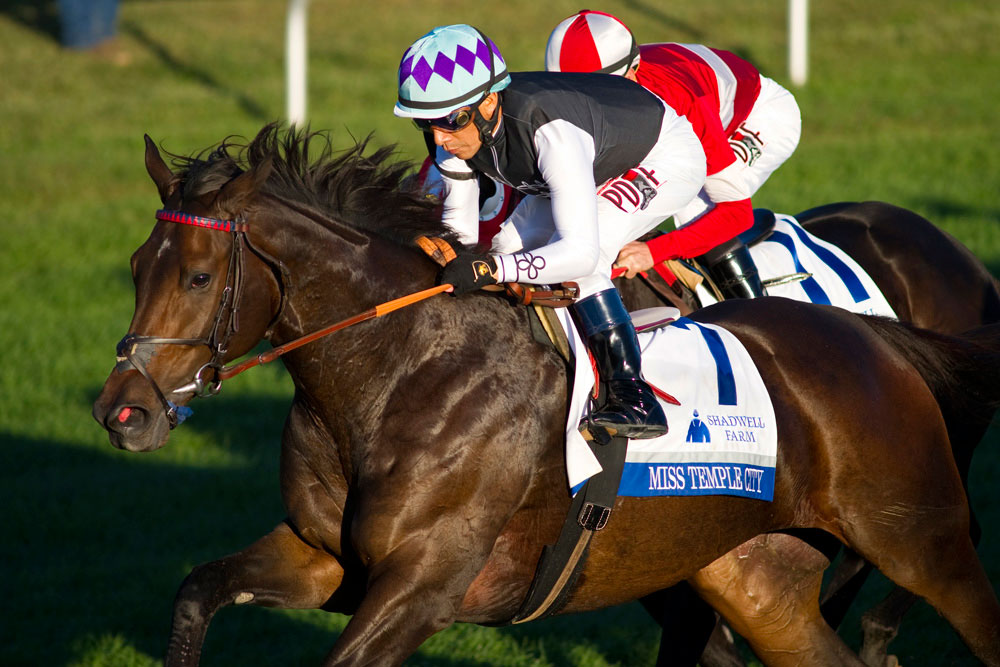 In 2016, Miss Temple City (Temple City) accomplished a double that few have managed, forgetting altogether that it's a filly we're talking about. The dark bay audaciously defeated Heart To Heart (English Channel) in the GI Maker's 46 Mile during the Keeneland spring meet and repeated the dose against the boys in the GI Shadwell Turf Mile, besting Ironicus (Distorted Humor) and future GI Breeders' Cup Mile winner Tourist (Tiznow). Now five, Miss Temple City will try to join the likes of Gio Ponti and Wise Dan as multiple winners of the Shadwell, bypassing an ostensibly softer spot in the GI First Lady S. earlier on the program.

While things went mostly according to script in 2016, it hasn't been the same this term, as Miss Temple City was 13th without the benefit of a tightener in the G1 Queen Anne S. at Royal Ascot June 20 and was beaten into third at odds-on in the GIII Matchmaker S. at Monmouth at the end of July. With a return to Lexington on the horizon, the mare tuned up with a confidence-building defeat of Zipessa (City Zip) in the GIII Ladies Turf at Kentucky Downs Sept. 9.

The admirably consistent Heart to Heart looks to reverse form with Miss Temple City as he tries to punch his ticket for the GI Breeders' Cup Mile, a race he has somewhat remarkably never contested. Tagged on the wire by American Patriot (War Front) in this year's Maker's 46 Mile in April, he was run over late and finished third in the GI Shoemaker Mile at Santa Anita June 3 but had things his own way when winning Sararoga's GII Bernard Baruch H. over rain-affected ground Sept. 4.