Mishriff Out On His Own In the International 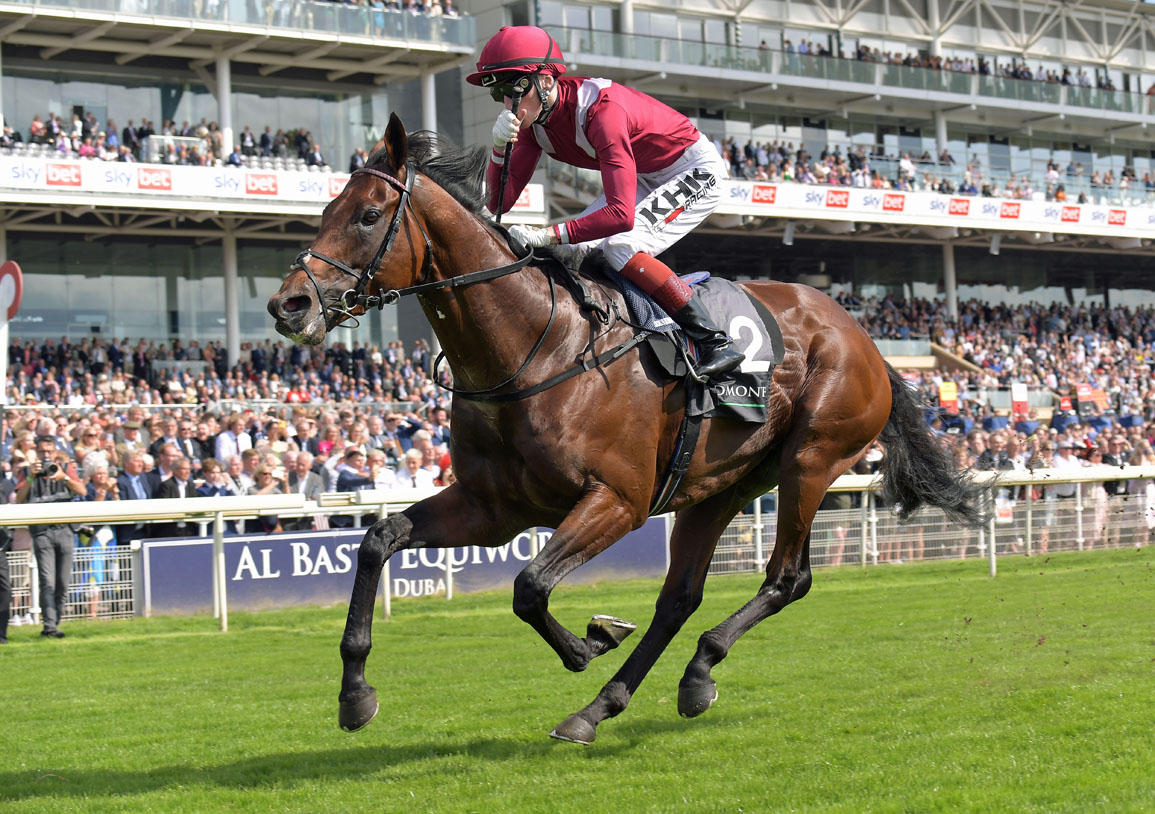 Gaining the British group 1 his record demanded in devastating style on Wednesday, Prince Faisal's Mishriff (Ire) (Make Believe {GB}) proved a class apart in one of the finest performances witnessed in the history of York's Juddmonte International. Third to the race's absentee St Mark's Basilica (Fr) (Siyouni {Fr}) on his European return in Sandown's G1 Eclipse July 3, the high-level worldwide campaigner had moved forward considerably in the subsequent three-week period to be runner-up in the G1 King George VI & Queen Elizabeth S. at Ascot. This represented a further leap, with David Egan able to bask in the moment after launching the homebred on to the lead approaching the two-furlong pole en route to a six-length defeat of Alenquer (Fr) (Adlerflug {Ger}) with Love (Ire) (Galileo {Ire}) half a length away in third. “A lot of people had questioned whether he could do it on home soil, so I'm thrilled for the horse and this is really special,” Egan said. “The way he cruises into his races between the three and the two, I really think he'd have put it up to St Mark's Basilica today. I'm just so privileged to be put in the position to ride for Prince Faisal and ride a horse like Mishriff. Winning the Juddmonte International, it's stuff I've dreamt of my whole life.”

Mishriff, whose early career involved a second on dirt in the Saudi Derby in February 2020 and a four-length success in the delayed Listed Newmarket S., had proved himself at this level on his first attempt by capturing Chantilly's G1 Prix du Jockey Club last July. Following up in the G2 Prix Guillaume d'Ornano at Deauville in August, he was only eighth in the G1 QIPCO Champion S. at Ascot in October but was back in the groove returning to Riyadh's dirt to garner the Feb. 20 Saudi Cup. Switching back to turf to take the G1 Dubai Sheema Classic on his first try at a mile and a half Mar. 27, he looked to have run into something special as St Mark's Basilica swept him aside at Sandown. What would have happened in the proposed rematch is conjecture, but John Gosden believes he had him undercooked for that contest and it is debatable whether the Ballydoyle sensation would have been able to live with this version of Mishriff.

Coming out of his tussle with Adayar (Ire) (Frankel {GB}) in the King George in buoyant form, the bay raced evenly in fourth early alongside Love as they tracked Mac Swiney (Ire) (New Approach {Ire}) and Alenquer. Always moving smoothly, Mishriff challenged up the centre of the track as all rivals were flat out and he was soon well beyond reach to recall memories of wide-margin winners of this in Sakhee, Royal Anthem and Assert (Ire) without quite hitting the dizzying heights of Frankel (GB). What he does have over the last three of that quartet is the ability to race with equal prowess on the dirt, which is where comparisons with the highly-talented Sakhee are apt as that Shadwell luminary went so close in the Breeders' Cup Classic 20 years ago. Giant's Causeway was another to lose out in agonising fashion in that monument, while this race's honor roll includes the similarly-versatile duo Singspiel (Ire) and Electrocutionist who managed to win the G1 Dubai World Cup.

“I was in the ideal position, one out and one back and everything worked out perfectly,” Egan said. “He got into a nice rhythm and he stays this flat mile and a quarter really well, so I was inclined to ask him to hit top gear and stretch the opposition. He prob will stay a flat mile and a half really well, so the Arc could suit. I had thought that over a mile and a quarter he had to be ridden prominently, but I couldn't believe how well he cruised into the race. He's a bit of a freak to do what he does on dirt and turf and I can't think of another one.”

John Gosden is looking to give the winner a break now ahead of big end-of-year targets. “I want to freshen him up again, as there's a campaign for him deep into the autumn,” he explained. “There's QIPCO Champions Day and the Arc, but I wouldn't run him on very testing ground. Then the Breeders' Cup Turf and the Japan Cup too. He wouldn't be one for the Breeders' Cup Classic this year. It's a very short straight at Del Mar and that wouldn't suit him at all. He needs a Belmont straight, not a Del Mar one. I think we've seen the finished article. This is the race we've talked about since last December, this has been THE race we've wanted to win with him and make him a stallion.”