Mischevious Alex Returns to Grade I Company in Carter 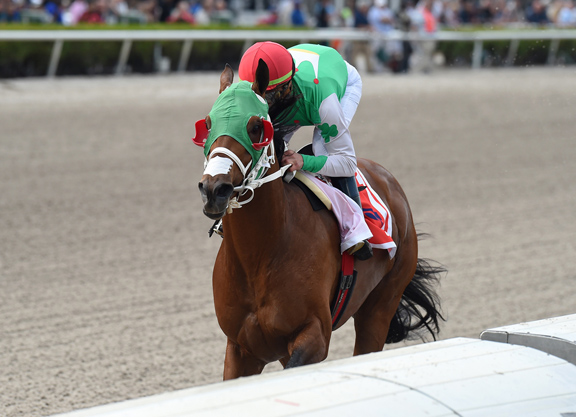 Last winter, Cash is King and LC Racing's Mischevious Alex (Into Mischief) created a buzz with back-to-back graded stakes victories, but was unable to sustain that momentum while making just two more starts in his 3-year-old season. The buzz is back for him after two more good-looking triumphs to start 2021, and he'll get another chance to prove his mettle in Saturday's GI Carter H. at Aqueduct, the first Grade I race in New York this year.

Romping by seven lengths in last February's GIII Swale S., Mischevious Alex successfully stretched out to a mile when annexing the GIII Gotham S. here a month later, but was taken off the GI Kentucky Derby trail before running fourth in the GI Woody Stephens S. and sixth in the GI H. Allen Jerkens S. Transferred from the John Servis barn to Saffie Joseph Jr. after that, he came back with a facile allowance/optional claiming success Jan. 10 at Gulfstream, a race that earned him a 103 Beyer and featured next-out wins from the second, fourth and sixth finishers. Back in graded company in the GIII Gulfstream Park Sprint S. Feb. 13, he notched a similarly easy score, and the bay has lit up the track in the mornings since, most notably drilling five furlongs in an eye-popping :58 2/5 (1/21) Mar. 14.

Multiple Grade I winner Mind Control (Stay Thirsty) returns to his favorite racetrack in his 5-year-old debut. Hero of the GI Hopeful S. and H. Allen Jerkens at two and three, respectively, he started his 2020 campaign with scores in the local GIII Toboggan S. and GIII Tom Fool H., but failed to find the winner's circle in his next six tries, most recently running third in the GIII Mr. Prospector S. Dec. 19 at Gulfstream. The Greg Sacco trainee has a record of four wins and one second from five starts at Aqueduct.

Shoplifted (Into Mishief) rates an upset chance, particularly if the pace gets hot. Third in both the Woody Stephens and H. Allen Jerkens last year, he flew home from last to just miss when second by a neck making his seasonal debut Feb. 6 at Oaklawn. Rounding out the quintet are last-out Tom Fool winner Chateau (Flat Out) and Souper Stonehenge (Speightstown), who was a close runner-up to ill-fated G1 Dubai Golden Shaheen upsetter Zenden (Fed Biz) in the Pelican S. Feb. 13 at Tampa.