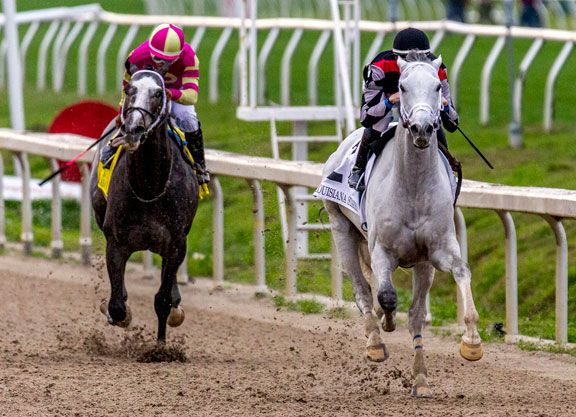 Silver Dust (Tapit), who scored in Saturday's GIII Mineshaft S. at Fair Grounds, has been disqualified and placed last for his previous victory, in the GIII Louisiana S. Jan. 18, due to a failed drug test, according to a report in the Daily Racing Form. The Bret Calhoun-trained gray tested positive for levamisole, the same drug that got eight Joe Sharp trainees disqualified from wins at the meet earlier this month. Calhoun is married to Sharp's mother, Sara Escudero, and the two trainers' barns at Fair Grounds are next to one another, according to the DRF.

In addition, Sharp pupil Blackberry Wine (Oxbow), who finished seventh in the first division of Saturday's GII Risen Star S. at the New Orleans oval, was disqualified from a victory in his previous race, an allowance/optional claiming event also run on Jan. 18.

Levamisole, which Sharp said earlier was found in an over-the-counter deworming product he purchased, is listed as a Class 2 drug by the Association of Racing Commissioners International.