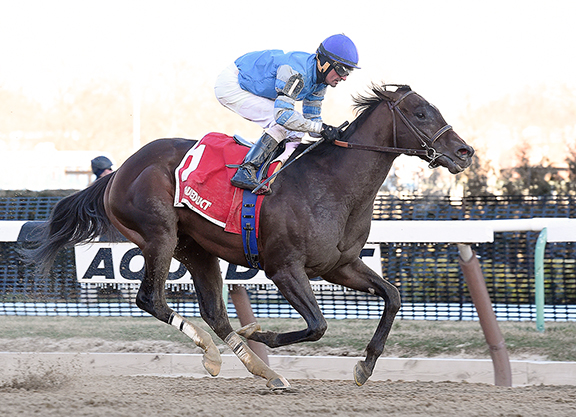 “TDN Rising Star” J Boys Echo upset heavily-favored fellow Rising Star El Areeb to score his first graded victory in the Gotham. Away well from the one-hole, the $485,000 KEESEP buy bided his time in a ground-saving fourth several lengths back off El Areeb, who was pressed by True Timber (Mineshaft) through opening splits of :23.58 and :47.70 with Cloud Computing just hot on their heels. Taking closer order on the backstretch, J Boys Echo charged up alongside the dueling Cloud Computing and El Areeb on the far turn as True Timber called it quits and swiftly closed the door on those rivals in the lane, rolling clear under a hand ride from Robby Albarado to win as he pleased. El Areeb faded in the stretch leaving Cloud Computing in a clear cut second.

“I felt pretty good going into the last turn,” winning conditioner Dale Romans commented. “He geared down, it was a pretty good move and he saved a little more for the next spot. He's coming around at the right time and the right way. He's been a work in progress and Tammy [Fox] deserves a lot of credit. This is her project horse. She's been on him every day since we've had him and done a great job bringing him around. He just needed to grow up.”

Romans added, “We'll have to talk about where we go next. It's hard for me to skip the [GII] Bluegrass [Apr. 8] and both [the Bluegrass and Apr. 8 GII Wood Memorial S. were] unjustly downgraded to Grade II's. Whoever did that doesn't know the history of horse racing, but we'll get into one of the two obviously.”

Cathal Lynch, trainer of beaten favorite El Areeb, said, “Pace makes the race and that's what happened. He ran well but you can't go :47 on this track and stay there. It set up perfect for the winner. I knew that horse [J Boys Echo] was going to run well because he ran well last time but pace killed us today.”

Closing into a slow pace to finish second in his 6 1/2-furlong unveiling at Churchill Downs Oct. 2, J Boys Echo overcame traffic trouble to romp by 5 1/2 lengths next out when extended to 1 1/16 miles at Keeneland Oct. 27. A late-on-the-scene fourth to Gunnevera (Dialed In) in the GIII Delta Downs Jackpot S. Nov. 19, he got up for third last time behind El Areeb and the reopposing True Timber in this venue's GIII Withers S. Feb. 4.

Out of 2005 GII Forward Gal S. heroine Letgomyecho, J Boys Echo is a half-brother to fellow Albaugh Family colorbearer and Romans trainee Unbridled Outlaw (Unbridled's Song), a GSP $330,000 KEESEP buy who most recently completed the trifecta in a Gulfstream optional claimer Feb. 18. Letgomyecho has a yearling filly by Broken Vow and foaled a Speightstown colt Feb. 22.