Mind Your Biscuits Supreme in the Golden Shaheen 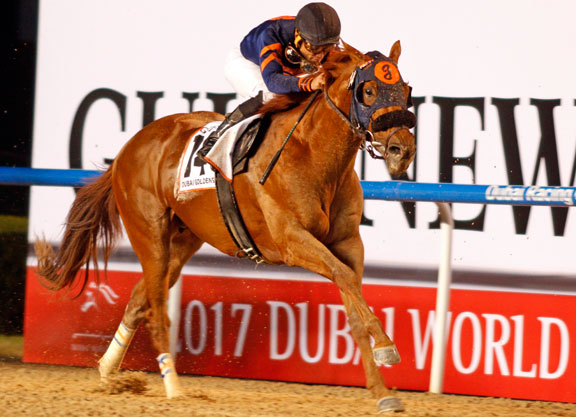 The American form looked strong going into Saturday's G1 Dubai Golden Shaheen and so it proved, with Mind Your Biscuits (Posse) proving a class apart to win going away by three lengths from outsider Comicas (Distorted Humor) with Morawij (GB) (Exceed and Excel {Aus}) taking the third spot. As expected, My Catch (Ire) (Camacho {GB}) took them along early and carried the field until the turn in where the strong traveling St Joe Bay (St Anddan) moved up menacingly to challenge. As soon as he hit the front he was challenged and headed by those that filled the minor placings, while Mind Your Biscuits was building up great momentum as he swooped down the centre of the track. That withering run soon took him past rivals to give his trainer Chad Summers a first-ever winner. Summers was naturally ecstatic and commented, “He went a little bit wider than we thought, but at this point I don't mind if he was touching the turf course. I am so thrilled for my team but this is such a special horse. Knowing we were coming here in December and setting up the game plan and the game plan came true. It's a storybook ending to a wonderful story.”

Jockey Joel Rosario rode the winner with a lot of confidence and one senses he knew he was on the best horse in the race. “I was quickly away but with a post position of 14 I thought maybe I was going to be too wide,” he said. “I was a little wide in the turn but he showed he was the best horse today. I'm so happy for Chad. He has worked really hard. I'm glad just to have the opportunity to be here.”

'Being here' represents a plan hatched by Summers, who co-owns Mind Your Biscuits along with his father, brother and other partners, and who took over the training of the horse from Robert Falcone Jr. in the New Year. This was the plan for the colt since his victory over G2 Godolphin Mile third Sharp Azteca (Freud) in the GI Malibu S. at Santa Anita in December. That race served as the culmination to a fine 2016 for the horse after a victory in the GII Amsterdam S. at Saratoga in July and second placing in the GI Breeders' Cup Sprint in November. He reappeared in 2017 with a pleasing effort when second in the GIII Gulfstream Park Sprint S., which seemed to leave him spot-on for this high-profile assignment.

Posse (Silver Deputy) didn't win a Grade I but that hasn't held him back as a sire, and he is already responsible for a dual champion in Kodiak Kowboy and a GI Breeders' Cup Mile winner in Caleb's Posse. Mind Your Biscuits is by far the best runner for his dam Jazzmane (Toccet), who has a 100% record with her three runners to date. She is a half-sister to Kimchi (Langfuhr), who was champion 3-year-old filly in Canada in 2006. Jazzmane's unraced stock include a 3-year-old full sister to Mind Your Biscuits and a 2-year-old colt by Officer (Bertrando).