Mind Your Biscuits Sold, To Stand in Japan 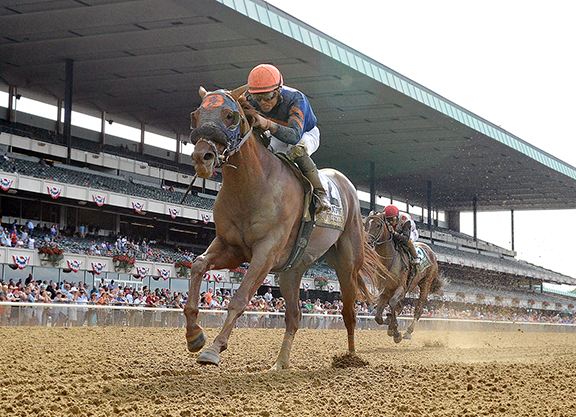 Three-time Grade I/Group 1-winning sprinter Mind Your Biscuits (Posse) has been sold to Teruya Yoshida's Shadai Farm in Japan, where he will stand after being retired from racing, trainer Chad Summers confirmed Wednesday. The story was first reported by Thoroughbred Racing Commentary.

The 5-year-old chestnut, voted New York-bred Horse of the Year in 2016, is best known for winning back-to-back renewals of the G1 Dubai Golden Shaheen the past two years.

“They approached us last summer at Saratoga and had some representatives come look at the horse and liked him,” Summers said. “Over the wintertime, [bloodstock agent] Eugenio [Colombo] stayed in touch with us. When we won in Dubai again this year, they came and made us an offer, which I turned down. Then they made us another offer, which I took.”

Unraced since his Meydan heroics, Mind Your Biscuits is scheduled to make his return in the GI Metropolitan H. on the GI Belmont S. undercard June 9, a stepping stone on the way to the GI Breeders' Cup Sprint at Churchill Downs in November. He finished third in that event last year and second the previous fall. His specific path beyond the Met is undetermined.

“It's all going to be up to him,” Summers said. “I think he's going to love Churchill Downs, we're excited about that, but from the Met Mile to the Breeders' Cup, how we get there is going to be kind of a wait-and-see approach. We're all in on the Met Mile and it'll depend on the outcome of that race where we go in the future.”

Summers also added that plans beyond the Breeders' Cup aren't set, but that this will probably be Mind Your Biscuits's final campaign of racing.