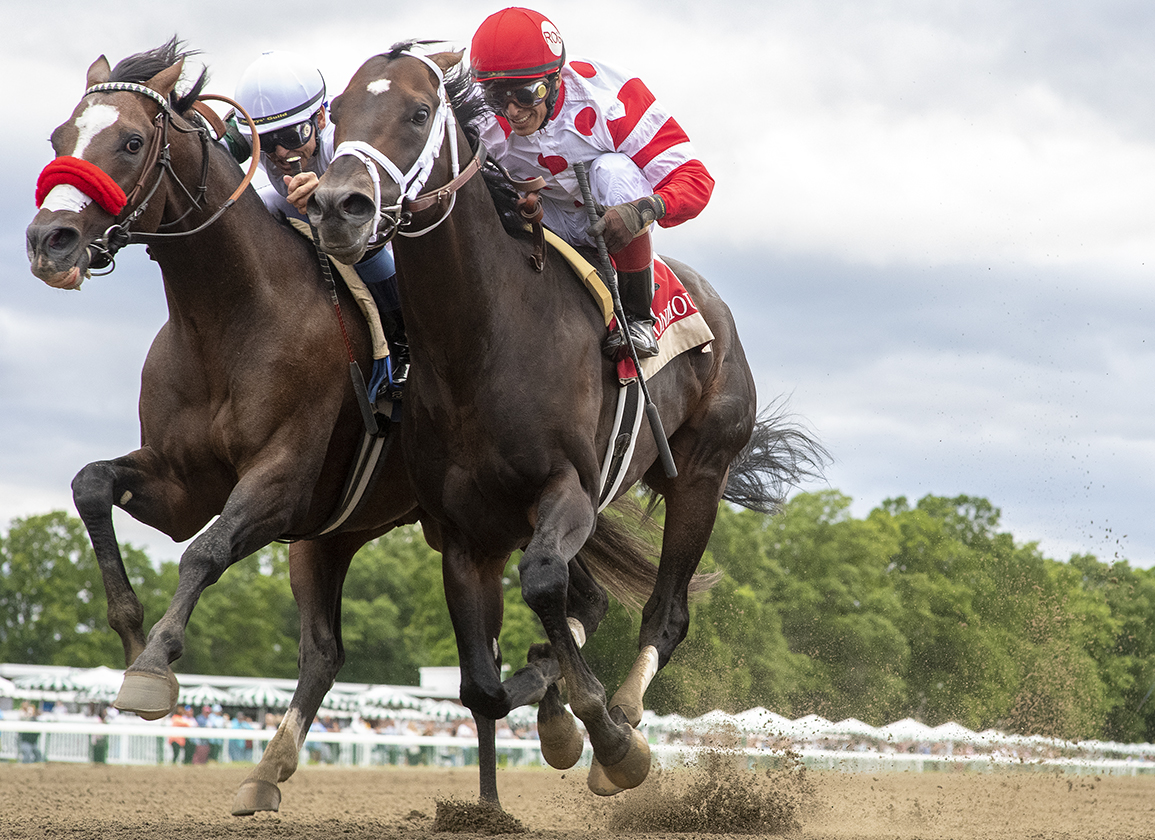 OCEANPORT, NJ–It was an unseasonably cool and windy June day at the Jersey Shore for Monmouth Park's GIII Salvator Mile S. and the match up on display for Saturday's marquee race was just as unusual as the weather. It is not often the Salvator Mile attracts a pair of Grade I winners, but that is exactly what the Monmouth Park fans were treated to Saturday with Mind Control (Stay Thirsty) meeting Hot Rod Charlie (Oxbow) for the first time. And what a treat it was!

GI Pennsylvania Derby hero Hot Rod Charlie, who was making his first start since the finishing second in the G1 Dubai World Cup Mar. 26, was hammered down to 1-5 favoritism. Meanwhile, his older, more experienced rival was a gift at 2-1.

With no other speed signed on, Hall of Famer John Velazquez made the astute decision to send the versatile Mind Control straight to the front from his rail draw. Hot Rod Charlie was away a breath slow beneath Mike Smith from post three and moved up to track his older foe from second through a :23.60 first quarter. Mind Control was still well within himself when Hot Rod Charlie turned up the heat as the half went up in :46.66.

Velazquez was still sitting chilly as Hot Rod Charlie and Smith drew even with Mind Control at the quarter-pole and the stage was set. The top two betting choices were well clear of the rest of the field as they battled stride-for-stride down the lane. Hot Rod Charlie even headed Mind Control halfway home–much to the delight of his enthusiastic group of owners cheering loudly at the wire–but his gutsy elder relishes a dog fight. The Red Oak team was equally passionate with their cheers as Mind Control dug in on the fence, determinedly forging past Hot Rod Charlie in the final strides to win by a head. It was 6 1/4 lengths back to GI Maker's Mark Mile winner Shirl's Speight (Speightstown) in third.

“Todd [Pletcher] said exactly what just happened, put him on the lead and try to steal it,”said Anthony Sciametta, Pletcher's Monmouth-based assistant. “He is a nice horse. He tries all the time. I actually thought he was beat there for a minute, but he came back. He likes Johnny.”

“My thought was, there wasn't much speed in the race, so I wanted to come out of there running and get a good position,” Velazquez said. “Todd texted Anthony and said, 'Tell Johnny to do what he needs to do.' I said, 'Thank you, that's what I needed to know.' He had the same thought as me. When he is on, he is a fighter. He is really tough to go by. Sometimes they go in front of him and he comes back at it. [Hot Rod Charlie] had almost half a neck in front of him and Mind Control came back at him.”

As for what's next, Sacco said, “There is nothing on the horizon right now. We will ship him back to Belmont and then get him to Saratoga and pick something out.”

As for the beaten favorite, trainer Doug O'Neill said, “We are obviously disappointed but we're just so proud of him getting back to the races. We want to thank Monmouth. They really rolled out the red carpet for us. We're grateful for the day and looking forward to the future.”

“He didn't run badly,” said Smith. “Credit to the winner. He was gallant. My horse fought with him. I thought Mind Control would get the lead over us. He is coming out of a sprint. We got him to stand still in the gate and he did that–he stood still. I kind of missed the break. I think that's what happened to him in Dubai too. That's why he was so far back there.  Ability-wise I know what he is capable of, so that is the reason I am not pleased. I know what he can do and this was not it.”

Winner of the GI Hopeful S. back in 2018 and the GI H. Allen Jerkens Memorial S. in 2019 for previous trainer Greg Sacco, Mind Control was transferred to Pletcher in the spring of 2021. He won the GII John A. Nerud S. last July and was fourth next out in Saratoga's GI Forego S. Concluding his season with a win in the Parx Dirt Mile S. in September, the bay kicked off this term with a third in Aqueduct's GI Carter H. Apr. 9 and was a non-factor fifth last time in the May 7 GI Churchill Downs S.

Pedigree Notes:
Mind Control is the only North American Grade I winner for his expatriated sire Stay Thirsty. His stakes-winning dam Feel That Fire is a half to MSW & GSP King For a Day (Uncle Mo) and a full to SW Ima Jersey Girl. The 15-year-old mare is also the dam of MGSP Goddess of Fire (Mineshaft), who was second in both the GII Fair Grounds Oaks and GII Gulfstream Park Oaks this season. Feel That Fire is also responsible for the juvenile filly White Hot Gold (Candy Ride {Arg}) and a 2022 filly by Uncle Mo.