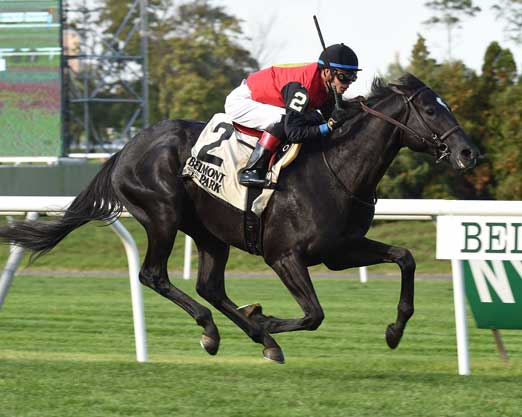 Penn National offers the premier card of its year-long meet Saturday evening with seven stakes events each worth $100,000 or more, anchored by the newly minted GII Penn Mile for sophomore turfers. The 10-horse field is headlined by George Krikorian's homebred Big Score (Mr. Big), who has logged significant frequent flyer miles this spring, traveling to and from Tim Yakteen's home base at Santa Anita to compete at tracks east of the Mississippi. The impressive dark bay notched his first graded stakes win in Keeneland's Apr. 7 GIII Transylvania S. and recently followed with a one-paced third-place effort in the GIII American Turf S. at Churchill May 6. Equipped with the services of Hall of Fame electee Javier Castellano in the irons, Big Score should find himself in his customary position rallying from off the pace.

Green Lantern Stables sends a homebred of their own to Grantville in Frostmourne (Speightstown), who figures to take his fair share of support at the windows. Winner of Belmont's Oct. 29 Awad S. in his third career start, the Christophe Clement trainee kicked off his 3-year-old season with a useful runner-up try in the Woodhaven S. at Aqueduct Apr. 22. Frostmourne possesses ample tactical speed and will likely need to use it from the far outside post traveling a flat mile.

Trainer George Weaver has two colts with early speed in Mo Maverick (Uncle Mo) and Holiday Stone (Harlan's Holiday). The latter endured a series of troubled trips during the winter months before nearly stealing the Transylvania, finishing a narrowly beaten second behind Big Score at odds of 34-1. The colt was recently a dull eighth in the American Turf.

'TDN Rising Star' Time to Travel (Hard Spun) is a full-brother to MGISW turfer Hard Not to Like and switches to the grass for the first time in his career here. The gray has competed admirably in each of his four career starts on dirt–including a recent runner-up finish in the May 20 Sir Barton S. at Pimlico–and trainer Michael Matz has enjoyed considerable success with similar surface switchers over the years.

Hronis Racing and Little Red Feather Racing will be represented by Cistron (The Factor), who ships in from trainer John Sadler's Southern California base. The speedy colt became a stakes winner with a front-running tally in Oaklawn's Northern Spur S. Apr. 15, but has never finished out of the trifecta in five tries on turf–including a recent second-place finish as the favorite in the 6 1/2-furlong Desert Code S. in Arcadia May 13.