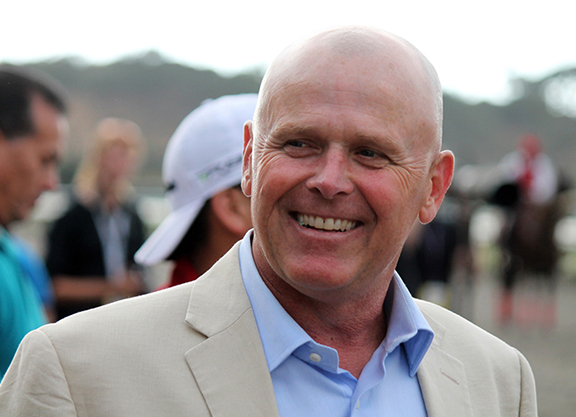 With over 2,000 wins and dozens of graded stakes scores on his resume, Mike Stidham has well established himself as a top trainer in this business. But as of yet, his stable hasn't quite found its breakout star–one that can take him to Breeders' Cup glory and maybe even an Eclipse Award or two. That may have changed with the arrival of Mystic Guide (Ghostzapper) in Stidham's barn two years ago, as the Godolphin blueblood has steadily developed into a budding star, fresh off a jaw-dropping victory in the GIII Razorback H. and headed for an engagement in the G1 Dubai World Cup. Wednesday morning, Stidham joined the TDN Writers' Room presented by Keeneland as the Green Group Guest of the Week to discuss his plans for Mystic Guide, how the Godolphin racing and breeding operation works, the demise of his beloved Arlington Park and more.

“As you can see from his past performances, we took our time with him. We spaced his races,” Stidham said of Mystic Guide's steady progression. “There were a lot of temptations because it had been moved to September to still try to make the Derby. He just always seemed like he was a step or two behind some of the top 3-year-olds last year. So we gave him the time and felt like he had really moved forward late in the year. At that point, again there was temptation to try him in the Breeders' Cup, but we decided to do the right thing and get him ready for his 4-year-old year. We never turned him out, we just lightened up on his training and I felt really confident from a maturity standpoint, mentally and physically, he had gone the right way. So the [Razorback] performance was not surprising.”

Asked about the surging Godolphin racing operation in America and how it operates across several trainers, Stidham commented, “When you look at the stallion power of these horses–Tapit, Hard Spun, Curlin–then you look down and you see mares like Panty Raid, Music Note, it's only a matter of time until they start to do what they're doing. Interestingly enough, the trainers never see the 2-year-olds until they walk into their barn. I know that Jimmy [Bell] makes trips down to Ocala where they're in training, mostly with Eddie Woods, Niall Brennan, David Scanlon, but we don't know anything about what we're getting until we get a list sent to our email. Until they walk into our barn, we've never seen them before. I think they try to somewhat fit horses to the programs that we're running and obviously they've done a great job, because it's working really well.”

Stidham has been a mainstay at Arlington Park in the summer for several years and has won multiple training titles there. But the news is not good for the Chicago-area plant, as it appears Churchill Downs will abandon racing there after 2021. He didn't mince words when asked his feelings about those developments.

“I'm very, very disappointed in the way Churchill has handled Arlington. I think it's total disrespectful to the Illinois horsemen,” he said. “For me, Arlington was like a national park would be for the public, where you cherish it, and for anybody to go in and tear it down and make it into a residential area because it's better for the stockholders shows no respect for the tradition of Arlington or the horsemen who fought for so many years to try to get gaming there to bolster Illinois racing. For them to walk along with the horsemen for all those years acting like they wanted gaming, then finally get it and then just flat turn it down because they got involved with a casino 15 miles away and didn't want the competition, it's just horrible and sad. It's a very sad day in racing to lose Arlington Park.”

Elsewhere in the show, the writers talked to TDN European editor Emma Berry about the Gordon Elliott story, reacted to a big weekend of 3-year-old racing and, in the West Point Thoroughbreds news segment, broke down the implications of the Irad Ortiz, Jr.-Paco Lopez fight. Click here to watch the podcast; click here for the audio-only version.