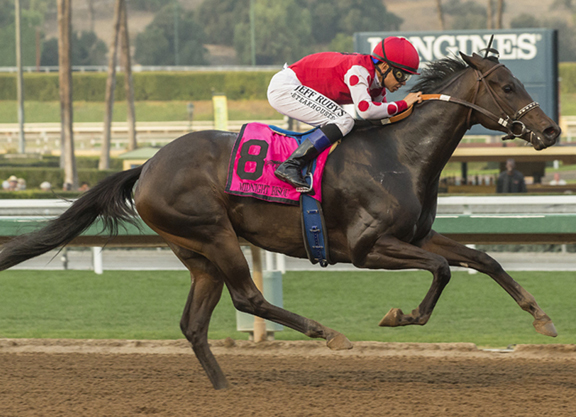 Midnight Bisou came up a nose short when second behind undefeated Grade I winner Dream Tree (Uncle Mo) in her first two career starts and found the field in Sunday's GII Santa Ynez S. to her liking, bounding home to break her maiden by 4 1/2 lengths. The filly mounted a wide bid on the turn and finished full of run beneath Hall of Fame pilot Mike Smith, earning 10 qualifying points towards a berth in the GI Kentucky Oaks starting gate.

“This is a hell of a way to break her maiden,” said winning co-owner Jeff Bloom of Bloom Racing. “[Trainer Bill Spawr] has been so patient with her and she just exhibits so much class and maturity. We really felt that she deserved to be in a race like this. Mike [Smith] gave her a great ride and this was a lot of fun.”

Away to alert beginning, Midnight Bisou settled into stride tracking the pace as the third of four horses across the track behind a quarter-mile in :22.38.

Biding her time in the four path on the turn as her forwardly placed rivals were asked for more, the filly circled the field willingly, rallied to the front in midstretch and edged away to win convincingly. Favored Win the War and 25-1 longshot Steph Being Steph hit the wire together, with the latter getting her nose down in front to complete the exacta.

“Bill told me one simple thing,” Smith said. “He told me to not be surprised if she was a whole lot closer than I would have thought today. 'She's pretty sharp and it's ok if she is.' I'm really glad he told me that because I was up there pretty close and thought I was too close. I still hit the front a little soon but she's a really good filly and she wants every bit of seven-eighths of a mile.”

Spawr added, “She wants to route, no question. Being around her, the way she acts, her temperament, she'll relish a route.”

Midnight Bisou was overlooked at odds of 21-1 in her career unveiling Oct. 27 at Santa Anita and made up good ground from seventh to hit the wire just short of $750,000 Fasig-Tipton Florida buy Dream Tree, who was also making her debut that day. The pair met again in the Nov. 18 Desi Arnaz S. traveling seven furlongs at Del Mar and the same exact scenario played itself out again, with Midnight Bisou rallying to just miss, beaten a nose by her talented rival. Given a brief freshening following that effort, the dark bay trained steadily over the local strip in recent weeks and sharpened up for the Santa Ynez with a three-furlong breeze just two days prior to Sunday's tilt.

Midnight Bisou's dam Diva Delite captured the GIII Florida Oaks and two other stakes events in 2010. She produced a colt by Congrats in 2016 and a colt by Warrior's Reward in 2017 before being bred back to Wicked Strong.