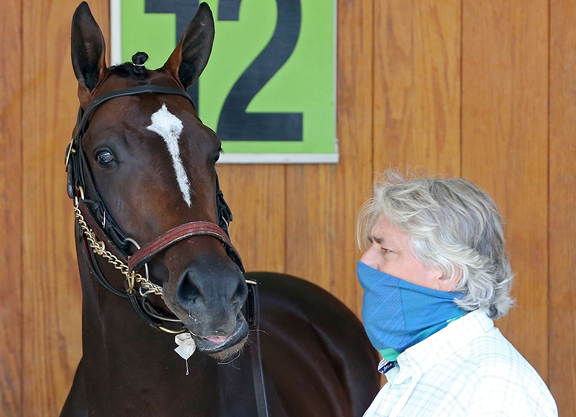 A $525,000 Keeneland September yearling, Midnight Bourbon won the GIII Lecomte S. in January and earned additional points on the Road to the Kentucky Derby with a third in the GII Risen Star S. and a runner-up effort in the GII Louisiana Derby. Unable to go forward after taking a bump at the start of the GI Kentucky Derby May 1, the strapping bay colt raced farther back in the field than connections wanted, but made some late ground to finish sixth, beaten just over eight lengths.

“He's doing great, wonderful physically,” said trainer Steve Asmussen, who saddled Curlin (Smart Strike) to win at Old Hilltop in 2007 and Rachel Alexandra (Medaglia d'Oro) two years later. “This morning, I watched Midnight Bourbon work. He's just such a beautiful specimen and he goes over the racetrack so pretty. Driving back to the barn from the grandstand, I was thinking how crazy we are as horsemen. It's only less than two weeks from the disappointment of the Derby, and here I am, thinking I'm going to win a Classic again and I get all giddy. Here we are less than two weeks later and we're all jazzed up, ready to go to Baltimore and we love our chances. Very fortunate to have these chances and horses of this caliber. I'm very optimistic going to Baltimore.”

Midnight Bourbon was a handful when schooling in the Churchill paddock in the days leading up to the Derby, to the point where Asmussen inserted himself into the situation. He plans to be on the shank again this weekend.

“Yeah, I'm going to lead Bourbon over,” he said. “He's just a lot of horse, and I'm probably the biggest guy in the barn.”