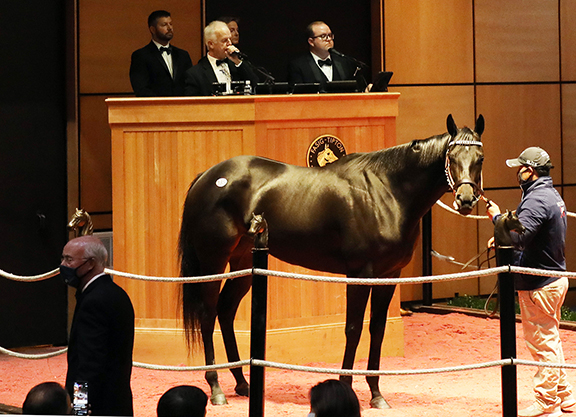 Midnight Bisou was purchased for $5 million by co-owner Chuck Allen at the Fasig-Tipton November Sale.

Midnight Bisou was preparing for her Breeders' Cup bid this fall when she incurred a sesamoid fracture during a work at the end of September that forced connections to retire the mare prematurely.
The champion shone as one of brightest stars at the Fasig-Tipton November Sale Nov. 8. Co-owner Chuck Allen of Allen Racing couldn't bear to part with the near $7.5-million earner and bought out fellow partners Bloom Racing Stable and Madaket Stables for a winning bid of $5 million.

After going through the ring, Midnight Bisou returned to WinStar Farm to complete the rehabilitation process.

“Midnight Bisou was at WinStar and has been cleared to begin a broodmare career and has arrived here safely today,” said Hill 'n' Dale General Manager Jared Burdine. “She's an earner of over $7.4 million, an Eclipse Champion. She's going to visit Curlin, who earned over $10.5 million and was a champion as well. So it's a Classic sire and it should be a Classic-distance baby. She's in great hands here. We're excited to have her here and can't wait to begin her career, especially with champion Curlin.”

She reached higher stardom at four, taking the GI Apple Blossom H., GI Ogden Phipps S. and GI Personal Ensign, earning the Eclipse crown for her division. This year, the Steve Asmussen pupil ran second behind Maximum Security (New Year's Day) in the Saudi Cup, romped in the GII Fleur de Lis S. after her return to the States, and then came in second in the GI Personal Ensign S.

“Special horses like her make us get up and try harder each and every day,” Burdine said. “They give you enthusiasm to get to the barn and they're what drives our business. She's a very intelligent, classy mare. She looks beautiful.”

Midnight Bisou is among the first new arrivals to Hill 'n' Dale at Xalapa, the farm outside of Paris, Ky. that John Sikura purchased over a year ago. The Hill 'n' Dale stallion roster made the journey to their new stud barn this October.

“There's no better place for her to begin her broodmare career, I believe, than with this setting here,” Burdine said. “We're honored that Mr. Bloom and Mr. Allen entrusted us with taking her through this part of her career.”