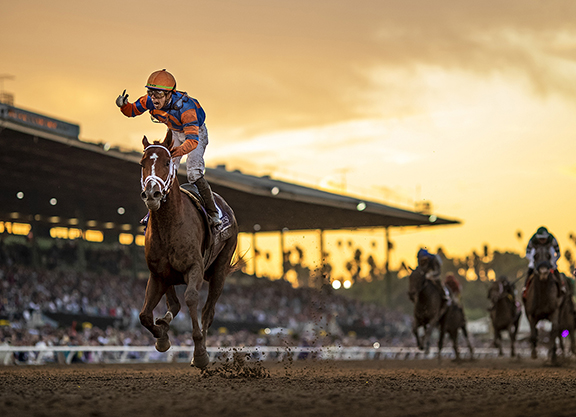 Repole and St. Elias Stable’s Vino Rosso had his share of ups and downs throughout the 2019 racing season, however, he rounded out the year, as well as his racing career, in rousing fashion with an authoritative 4 1/4-length victory in the GI Breeders’ Cup Classic at Santa Anita Nov. 2.

After launching 2019 with a score in the one-mile Stymie S. last March, the chestnut was fourth in the seven-panel GI Carter H., but showed his obvious affinity for the added yardage with a 3/4-length win over Gift Box in the 10-furlong GI Gold Cup at Santa Anita in May. Third behind fellow Eclipse finalist McKinzie (Street Sense) in the Aug. 3 GI Whitney S. over nine furlongs, the John Gunther-bred colt posted another strong performance, crossing the wire a nose ahead of Code of Honor (Noble Mission {GB}) in Belmont’s GI Jockey Club Gold Cup Sept. 28, but was subsequently demoted to second for interference in the stretch.

After punctuating the season with a Classic score, trainer Todd Pletcher remained confident that the 4-year-old had done enough to merit a year-end title.

“To me, the champion older horse is one that won at a Classic distance,” said Pletcher. “Vino Rosso had two Grade I’s at a mile and a quarter, a controversial disqualification in another, and he stamped himself as the dominant Classic older horse in the country. With the most significant race for older horses being the Breeders’ Cup Classic and putting forth a dominant victory there, I believe he deserved the champion older male title.”

Vino Rosso retired to Spendthrift Farm following the World Championships, where he stand for an introductory fee of $30,000.

“This is a humbling honor. On behalf of Mike Repole, his family and Repole Stables, led by Jimmy Martin and Ed Rosen, and St. Elias Stables, led by Rory Babitch and John Sparks, Teresa and I, we want to thank the NTRA, the NTWAB and the Daily Racing Form for this distinct honor. Most important, we want to thank three people and a horse. The horse was selected, broken quite arduously–he was a stubborn, too cool for school young horse–by Jimmy Crupi, who, if not for him, my family would not have taken the test of this industry and great sport. Irad Ortiz, in a horse’s career, there is that one rider that brings out the best, and you did that for Vino Rosso. Your confidence and bravado really truly propelled him. Todd Pletcher is beyond a doubt the most significant creator of stallions in our industry and is a horsemen of terrific discipline and rigor. He conducts himself in a way that is unparalleled amongst the giants in our sport. The confidence of Todd Pletcher and Mike Repole made this horse what he became. Finally, Vino Rosso, like a fine wine, aged magnificently.” —Vinnie Viola of St. Elias Stable, co-owner

“I thought that physically, he very much looked like a Curlin. What impressed us about training him as a 2-year-old was, even though he wasn’t extremely precocious, when he did come in and get up to that 5/8ths breeze, which seems to be the barrier that separate the real quality from the pretenders, that is when he started to excel. We thought here is a horse that is bred to get better when he is older and gets to stretch out in distance, but he was training like the type who would win and be competitive in his first start, which we felt boded well for his future.” –trainer Todd Pletcher

Midnight Bisou was nothing short of sensational in 2019, winning seven straight races–all of which were graded–and finishing second in the GI Longines Breeders’ Cup Distaff S. Capturing her seasonal bow in the GIII Houston Ladies Classic S. Jan. 27, the dark bay nosed out Escape Clause (Going Commando) after a gritty stretch duel in that venue’s GI Apple Blossom H. next out Apr. 14. Facing a small, but talented field in Belmont’s GI Ogden Phipps S. June 8, the $80,000 OBSAPR purchase won for fun with a 3 1/2-length defeat of Come Dancing (Malibu Moon).

Scoring another facile victory in Monmouth Park’s GIII Molly Pitcher S., Midnight Bisou won a knock-down-drag-out battle with Elate (Medaglia d’Oro) by the tip of her nose in the GI Personal Ensign S. at Saratoga Aug. 24. A decisive winner of Belmont’s GII Beldame S. Sept. 28, the Steve Asmussen trainee came running late in the Breeders’ Cup, but could not reel in Blue Prize (Arg) (Pure Prize) and was forced to settle for second.

Midnight Bisou accomplished more than enough prior to the World Championships to remain on top of her division and was scratched from the Fasig-Tipton November Sale to stay in training for 2020. Her dam Diva Deelite did go through the ring at Fasig’s Night of the Stars, selling to David Redvers for $1.2-million carrying a foal by Justify.

“What an amazing feeling to be up here. The whole thing is surreal. First of all, I’d like to thank all the voters for voting our filly an Eclipse winner. And of course, we were in an amazing category with Elate and Blue Prize. They were very accomplished fillies and mares and very competitive. A huge thanks to all the individuals who made this happen for us. Anybody who in any way touched our amazing filly, starting at the beginning with Woodford who bred, raised and trained her to get her to the sales; Bill Spawr, who started her out in California for us; the incomparable Steve Asmussen, who consistently and always does just such an amazing job, including Scott Blasi, Darren Fleming and the rest of the team, too many to name, but I can’t thank them enough. The jockeys, of course, Hall of Fame jockey Mike Smith, who has done such an amazing job on our filly, as well as Johnny Velazquez and the other riders who rode her. And of course, I’m standing here with my family, Susie, Hannah, Ashley, and our dear friends and partners Chuck and Lori Allen, Andrew Yaffe, who couldn’t be here tonight, and Steve Kulmin, Sol Kumin’s father. Sol couldn’t be here, but Steve is here representing, making this evening so special for us. And then finally, Midnight Bisou, who exemplifies class, elegance, and determination. She is truly the heart and soul of an athlete and really epitomizes a true racehorse.” –Jeff Bloom of Bloom Racing Stable, co-owner

“Midnight Bisou was a decent-sized foal weighing in at 120 lbs. She was always a very efficient mover, but she wasn’t a standout by any means. It wasn’t until she was in training in Ocala as a 2-year-old that she began to develop towards what she is today. She was a 19k RNA at Keeneland September and we now all wish we had bid 20! ” –Matt Lyons, former manager of Woodford Thoroughbreds