Home » Archive » Shared News » Michel a Sure Topper at Fasig

Michel a Sure Topper at Fasig 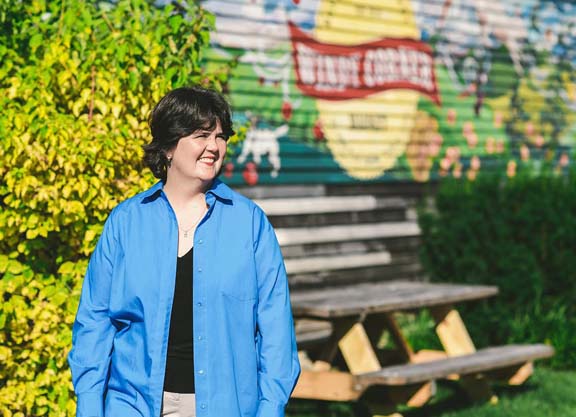 Although the sale topper will always different, there are some things about horse auctions that remain consistent. The days are long, and people get hungry. With that in mind, this summer Fasig-Tipton upped its food game by bringing in respected Kentucky chef Ouita Michel to help with The July Sale in Lexington. The positive results mean that Michel and her team will be back at it when it comes time for the October Sale, which begins its three-day run on Monday.

“They did a great job, and we look forward to a long relationship with Ouita and her organization at our Kentucky sales,” said Boyd Browning, Fasig-Tipton's president and chief executive officer. “It is a first-class operation. We got rave reviews and a lot of positive feedback. I think people recognize her restaurant group as being very high quality, and the overall response was tremendous.”

Michel's name is well-known to many in the Bluegrass, thanks to her collection of unique eateries throughout Central Kentucky. In 2001, she opened Holly Hill Inn in Midway, and Wallace Station Deli, Windy Corner Market and Restaurant, Smithtown Seafood, and The Midway Bakery have followed since. She is also the chef-in-residence for Woodford Reserve Distillery.

Although in a fairly remote part of Lexington, Windy Corner is located near Fasig-Tipton, and it is a common stop for many in the Thoroughbred industry. In fact, Michel's landlords for that property are none other than Gainesway's Antony and Angela Beck.

“A lot of the Fasig-Tipton folks were eating out there, and they happened to mention to the manager that we ought to come to Fasig,” said Michel. “They were just regular customers and approached us. We were worried about doing it because it is a big stretch. It is a lot of moving parts to move your whole concept, since we essentially open a limited-edition Windy Corner at Fasig, plus run the stable kitchen and the buffet. Once I got through July, I was like, 'Oh my goodness, this thing is an octopus.'

“It was so fun, though, and our whole staff loved it. It is like being at summer camp in a weird way. The facility is incredible, and they put so much into it that it is an honor and a thrill to be out there. The people of Fasig are really just great to work with.”

Michel's crew oversees several types of dining options for hungry patrons at the sales that are snapshots of her restaurants. Windy Corner at Fasig-Tipton is located off of the back walking ring, and it features things like po-boys from the original restaurant as well as sandwiches reminiscent of Wallace Station. The stable kitchen also features “Windy and Wallace” type foods, as well as bakery items one might find at Midway Bakery.

Meanwhile, the large dining room has been rechristened the Seattle Slew Room, and it is a sit-down affair that is closer to the fare at Holly Hill Inn.

“They didn't have a name for that room, and I was like, 'This is a sin, you have to name your main dining room,'” said Michel. “One of my biggest thrills in July was that they put a sign and a statue of Seattle Slew out front, and his jockey, Jean Cruguet, came. I have a picture of myself with him in front of the Seattle Slew Room, and I told him, 'It's your lucky day. We have a special today: Triple Crown winners eat free.'”

When Holly Hill Inn opened 15 years ago, Michel and her husband, Chris, moved to Midway, and that is when she says her horse education began as well. Dan Rosenberg was the president of Three Chimneys Farm at the time, and shortly after the restaurant opened, he invited them to dinner, which included a tour of the farm.

Wallace Station opened just down the road from Three Chimneys in 2003, and the popular eatery has been featured on the Food Network's Diners, Drive-Ins and Dives.

“When we first opened Wallace, people told us we were crazy because there was no one out there, and we wouldn't get any business,” said Michel. “That is just because the populations that support horse farms are hard to see because of all the green grass. They are dispersed into this beautiful landscape, but they are there. The same thing happened at Windy Corner. I felt like I was out in the middle of nowhere there, but I should have known better because of the Wallace experience. It has just gone gangbusters.

“It is fun because of all aspects of the whole culture come to both restaurants. You have owners and grooms, and everybody is side-by-side in those places eating. It was a thrill and a half when the owners of California Chrome waltzed in after winning the Kentucky Derby, and the whole staff was going bananas and taking pictures.”

Although Michel had never participated in a Thoroughbred auction before July, she has ties to the racing community that go beyond just her restaurants. One of her customers went so far as to name a racehorse Wallace Station, and after his rather modest career was over, “Wallace” was used to encourage people to visit nearby Old Friends Farm.

“Over the years, horse racing becomes part of your culture and you become more engaged in it,” said Michel. “We have donated carrots to Michael Blowen and Old Friends every single week for the last 10 years or so, so we estimate that is thousands of carrots. As for Wallace, he has been reeducated in dressage and has a whole new career in front of him as a show horse. He is doing really great.”

When it comes to edibles for humans, Michel has long prided herself in locally sourcing as many of her ingredients as possible, even before it was in fashion to do so. As a result, what hungry auction-goers will be offered in October will be a bit different than what was on the menu in July.

“They have a lot of fresh products, and it is seasonal in nature, so the menu changes,” said Browning. “That is the cool part. They are very conscious of what products they can source and where they can source them at any given time of the year.

“They really do a wide variety of foods, and the thing that is consistent is the quality of their service and the products they produce. They can cover from A-Z, but they maintain really high quality whether it is at A or at Z.”

According to both Browning and Michel, that connection to local farmers is one of the added benefits of the new relationship between the two organizations as they build on the partnership.

“Now Fasig-Tipton is tied to thousands of dollars of local agricultural purchases,” said Michel. “For example, all the beef, all the pork is local, and there are lots of local vegetables. I think that is nice because the horse industry is our premier agricultural industry in Kentucky, and now when you buy something to eat at Fasig, you are supporting all kinds of other farmers and producers in the community as well. That makes me happy.”