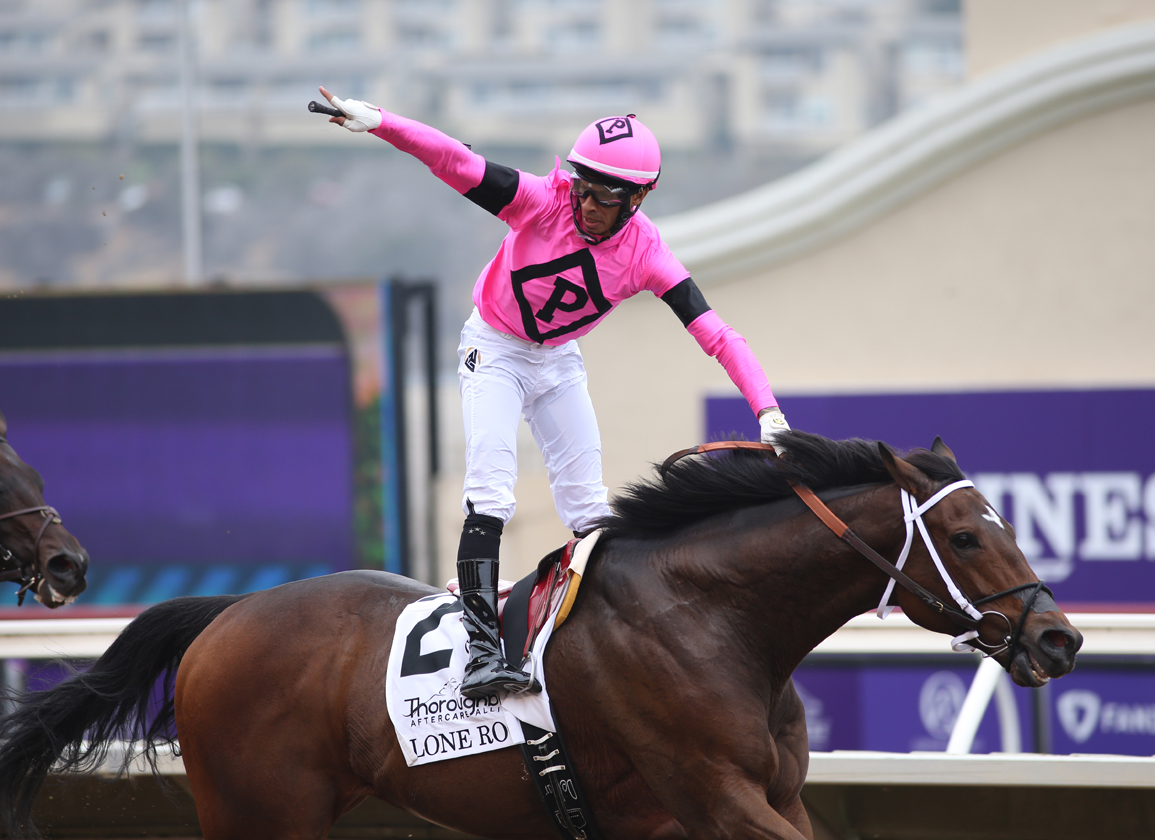 Flying P Stable and R. A. Hill Stable's Lone Rock (Majestic Warrior), winner of the 13-furlong GII Thoroughbred Aftercare Alliance S. on the Breeders' Cup undercard at Del Mar Nov. 6, is a possible candidate for the G1 $12-million Dubai World Cup Mar. 26, according to trainer Robertino Diodoro. If all goes well in the 7-year-old gelding's next start, the GIII Razorback H. at Oaklawn Feb. 12, the Dubai World Cup will likely be next.

“I don't know if we have to win [the Razorback],” Diodoro said. “We are shortening up to a mile and a sixteenth in the Razorback. As long as he shows up again and runs like he's been running, then we're going to give it [Dubai World Cup] some serious consideration, for sure.”

Lone Rock closed out his 2021 campaign, which also included wins in Belmont's GII Brooklyn S. and Saratoga's Birdstone S., with a Dec. 18 score in Oaklawn's 1 1/8 mile Tinsel S. He won seven of nine last year after being claimed by Diodoro for $40,000 in his last 2020 start, a Churchill win at one mile. It was the second time in four months–and four starts–that Diodoro had claimed the bay. The conditioner began stretching Lone Rock out and the gelding responded with five wins at 1 1/2 miles or more.

The Razorback, held at 1 1/16 miles, would be Lone Rock's first start at less than 1 1/8 miles since an allowance victory at the Razorback distance in his 2021 debut last February at Oaklawn. The Dubai World Cup is contested at about 1 1/4 miles. Gun Runner (Candy Ride {Arg}) won the 2017 Razorback before finishing second in Dubai in what ultimately culminated with a Horse of the Year title. Mystic Guide (Ghostzapper) won last year's Razorback prior to a Dubai World Cup win.

“After talking with the owner and stuff, I think [the Razorback] lines up good,” said Diodoro. “Got lots of space between the Tinsel and the Razorback… I keep saying as soon as this horse is telling us he needs a break, we're going to go give him a break. But right now, he keeps telling us he's ready to go and take one step at a time.”