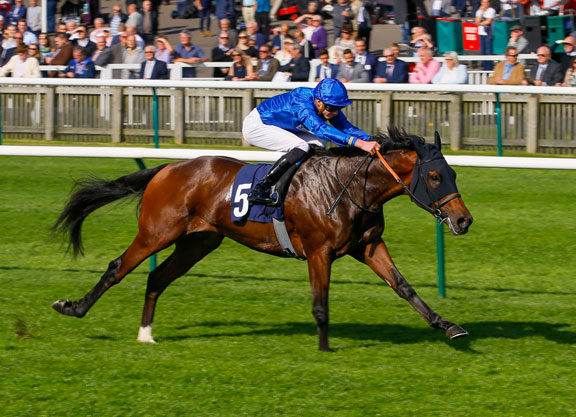 “He's the highest-rated horse in the race and we know he predominately runs well fresh, so that's why we are working backward from the G1 Sheema Classic,” trainer Charlie Appleby said of the 2019 14-length G1 Grosser Preis von Baden victor. “That's why I have come a couple weeks forward, rather than the usual trial route in the [Mar. 7 G2] City of Gold. I thought this was timing-wise better for him. He looks well and he's fresh, so we expect a good run out of him on Thursday. Again, the target is the Sheema, so he's not fully wound up by any stretch of the imagination. He's fit enough to come out and run. If he turns up [victorious] there, he's the class horse in the race, anyway. Whatever he does, hopefully we have the improvement there for the Sheema Classic.”

The 115-rated Desert Encounter (Ire) (Halling) lines up for David Simock and Abdulla Al Mansoori. The 8-year-old gelding is the third top-level winner in the Dubai Millennium, having scooped the GI Pattison Canadian International S. at Woodbine in Canada at the end of his 2019 campaign. It was his fourth straight score, after taking the Aug. 2 G3 Glorious S. at Goodwood, Windsor's G3 Winter Hill S. on Aug. 24 and Newbury's G3 Legacy Cup S. on Sept. 21.

Hoping to add to her Classic haul after taking the Listed UAE 1000 Guineas here going a mile on Jan. 23, Godolphin's Dubai Love (GB) (Night of Thunder {Ire}) faces five rivals in the 1900-metre G3 UAE Oaks later on the card for Saeed bin Suroor. The race is worth a total of 85 GI Kentucky Oaks points (50-20-10-5), and the winner is guaranteed a spot in the Mar. 28 G2 UAE Derby. Off the mark at first asking at Nottingham on Oct. 2, she ran third in a Kempton all-weather affair on Nov. 6. In her sophomore bow, she was a one-paced fourth in the UAE 1000 Guineas Trial on Jan. 2 prior to her Guineas score. The re-opposing Down On Da Bayou (Super Saver) was two better that day behind bin Suroor's Final Song (Ire) (Dark Angel {Ire}).

An intriguing entrant is Japan's Serein (Uncle Mo), who will have Yutaka Take at the controls for Koji Maeda and trainer Mikio Matsunaga. These connections raced Lani (Tapit) to a win in the G2 UAE Derby in 2016. Successful in a Sapporo maiden last July, the dark bay ran second going a mile at Tokyo in October. After an unplaced run there on Nov. 23, she was back to winning ways stepping up to 1800 metres at Nakayama on Jan. 25.

Immediately after the UAE Oaks, turf milers take their chances in the G2 Zabeel Mile. Mythical Magic (Ire) (Iffraaj {GB}), a winner of this last year for the team of Godolphin, Charlie Appleby and William Buick, unite again with the 5-year-old gelding. Runner-up in the 2019 G2 Al Fahidi Fort, the bay found Glorious Journey (Dubawi {Ire}) too good in the 2020 edition on Jan. 23 after a pair of unplaced runs in England last summer.

“Mythical Magic is doing the same sort of route as last year, where he was second in the Fahidi and then hopefully he can step forward one place and go very close there in the Zabeel Mile,” said Appleby. “He's come out of the Al Fahidi in good order and the step up to a mile was always going to suit him, so he was always going to be a major player and the one to beat.”

“Zakouski is a horse who's obviously won nicely in his handicap debut there and he's definitely come forward for that run,” Appleby continued. “He obviously had been tried at group company in the past in the Craven, but he's a different individual and character now and we've gelded him since then. This is his first step back up into group class again, but we feel he deserves to have a crack at it and he's the younger pretender compared to Mythical Magic, who's sort of been there and done it. Two nice horses to have in the race.”

Another royal blue representative is Saeed bin Suroor's Dream Castle (GB) (Frankel {GB}), who is aiming to go one better after finishing 2 1/4 lengths second in the G2 Al Rashidiya on Jan. 30. The 6-year-old enjoyed a profitable Dubai campaign last term, culminating with a win in the Mar. 9 G1 Jebel Hatta.

“He ran much better last time and is in good shape at home,” said bin Suroor. “It looks a tough race, but we are happy with him.”

Juddmonte's Equilateral (GB) (Equiano {Fr}) makes his return to group level in the G2 Meydan Sprint over the minimum trip. A listed winner at Doncaster last September, he was gelded after a sixth-place run in the G3 World Trophy S. at Newbury on Sept. 21. Sent to the sidelines for 124 days, the Charlie Hills trainee returned victorious in the Listed Dubai Dash going this distance on Jan. 23. Shadwell's Waady (Ire) (Approve {Ire}) was two lengths back in second.

“It's always been the plan to run him in this race so that we had a chance to freshen him up [after the Dubai Dash],” Hills said. “We have had a couple very nice pieces of work with him and James Doyle came and sat on him and was very pleased. I couldn't be happier with how he's training and how he looks. He's put his weight back on and his coat is coming through nicely, so I think he really enjoys it over there. The track also suits him, being a flat, fast course.

“[Any lack of pace] shouldn't be an issue for him, as he's made the running before and won. If he runs well, we'll keep [training] him the same way and if he goes on to the [G1 Al Quoz Sprint over 1200m], hopefully he will keep travelling and finishing like he did last time. I think we could still see some improvement from him.”